Journalist and bestselling author Jo Piazza has long considered herself an independent feminist woman who didn’t need a man to complete her. She was pretty ambivalent about marriage until she met the greatest guy in the world on a boat in the Galapagos islands. They got engaged three months later. Piazza had no idea how to be a partner while also maintaining her independence. To try to figure it out she set out on a journey around the world to 20 countries on five continents to interview women about what a real happily ever after can and should look like for a modern woman who wants a marriage of equals. The result is her hilarious and thought provoking new memoir How to Be Married.

She concluded the book while on assignment for the Alaska Airlines blog in Scotland.

The following is excerpted with permission from HOW TO BE MARRIED: What I Learned from Real Women on Five Continents About Surviving My First (Really Hard) Year of Marriage. Copyright © 2017 by Jo Piazza. Published by Harmony Books an imprint of the Crown Publishing Group, a division of Penguin Random House LLC.

I got more marriage advice than most people bargain for during the first year of my marriage. But as I was nearing the end of those first twelve months I kept coming back to one thing—travel without your spouse.

It’s counterintuitive, I know … get a happier marriage by spending less time together. But I was promised over and over again, from experts and long married couples alike, that traveling apart was one of the best ways to nurture a happy partnership.

With that in mind and my first wedding anniversary a couple weeks away, I flew across the country and over the Atlantic Ocean for a weeklong road trip through the Scottish Highlands with my best friend, Glynnis. She flew in from Paris, where she was finishing her own book, to meet me for the week. Nick and I would celebrate our actual anniversary with a camping trip in Yellowstone National Park, a surprise he’d planned all by himself.

After twelve months of being married and researching what marriage and partnership means in the twenty- first century, I learned a few things. Yes, I can tell you all about teamwork and communication and divvying up chores and duties and date nights and going to bed angry, or not angry, but one of the most important things I learned was to maintain my own life outside my marriage. I needed to make sure I still felt like me.

And so Scotland. With Glynnis.

“Life doesn’t get much better than driving through the Scottish countryside while eating Cadbury chocolate,” Glynnis said, reaching into a plastic bag filled with Twirls, Flakes, Crunchies, and Dairy Milks that we’d picked up at the local Tesco.

“I can’t believe Cadbury hasn’t asked us to make a commercial yet,” I added. “It’s a real oversight on their part.”

Glynnis was the one who drove me into my first year of marriage, literally thousands of miles across the country in a tiny yellow car that smelled like potato chips and giant dog and metaphorically by being the officiant at our wedding. Now she’d be the one to drive me, in a tiny black car with a stick shift, on the wrong side of the road, out of the first twelve months. That meant a lot to me. Getting married doesn’t mean you leave the support systems that existed before the marriage behind you, or that they become less necessary. We create families for ourselves well before we get married, intricate webs of relationships that aren’t recognized by law, but are no less important, valuable and meaningful. Maintaining those is a crucial part of making any relationship work. Your spouse can’t be your everything. Amazing friends can still feed your heart and soul in a different way, a way that ultimately supports the health of your partnership.

In researching the history of male- female relationships I also learned that it is much too easy for today’s modern, independent ladies to forget that a married woman’s freedom to travel without her spouse is a relatively new phenomenon. For most of human history a woman rarely traveled outside the boundaries of her hometown unless accompanied by her husband or her father. I planned to make the most of this privilege.

It isn’t just a privilege in the sense that getting to see the world on your own or with your girlfriends is a wonderful treat, it’s that the time away puts your relationship with your spouse in perspective. The moment I landed in Scotland, I realized two things. The first was that I’d missed traveling on my own, about being forced to take care of myself. When Nick is around to handle things, it’s easy to complain, to be a pain in the ass. It’s easier than I ever expected to enjoy being taken care of. Nick has grown so good at noticing when I am cold or hungry or about to be crabby that sometimes I forget to anticipate my own needs. But the more important thing I realized was that I missed Nick like crazy and I began to appreciate all those small things he does for me without my ever having to ask for them.

When you wake up next to someone every day, pick their hair out of the drain, clean up their dirty dishes, socks and underwear, listen to them bitch about their job and tell the same stories and jokes over and over again, it’s nice to be reminded of what it’s like when they’re not around— and to realize things are better when they are.

Glynnis and I planned to camp in a run-down little cabin in the Cairngorm mountains, the highest mountains in the UK (which isn’t saying a lot), a tundralike wilderness filled with dense groves of ancient Caledonian pines reminiscent of fairytale forests. Nick is the camper in our family, but I did OK preparing for Glynnis and my overnight survival by packing ample provisions of chocolate and Scotch whiskey. It took a few hours of driving to make it to Aviemore, the sleepy village from where we’d set out on a three-mile hike up the mountain where we’d sleep for the evening.

“Do you know where we’re going?” Glyn asked me.

“I think so,” I said with false certainty once we began walking. “I studied the maps. It should be a straight shot. There will be a lake, a curve in the road, and then we should be there.”

We continued our walk up and over rolling hills blanketed in royal purple heather, leaping over gurgling mountain brooks and skirting a loch so green it had to be a home for fairies. The still-damp air smelled vaguely of peat and something smoky, like the aftertaste of Scotch whiskey. We ascended yet another hill and went around a bend, nearly tripping on tree roots that cracked up through the rocky path. And then we saw it—a small stone structure so tiny and quaint, it was likely inhabited by a hobbit. Our shelter for the night. 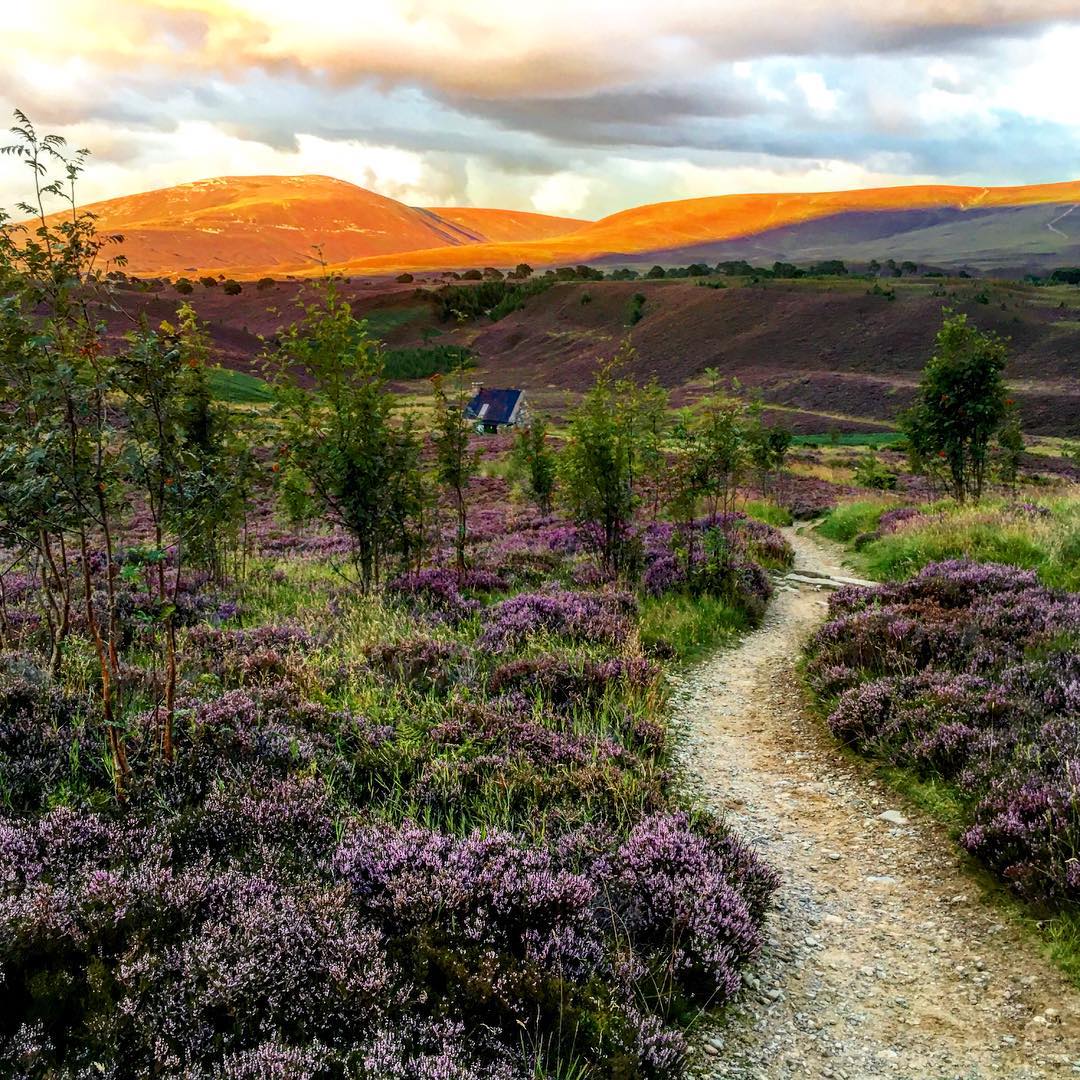 “We did it!” I exclaimed. “I got us here!” It was such a small thing, but there was something powerful about doing this without Nick. This was the magic of traveling on my own—this sense of empowerment. I was still me! If Nick had been there I would have fallen back and allowed him to lead the way. It felt good to know I could still find my way on my own.

Of course Glynnis and I had remembered to bring the chocolate and the whiskey, but had only packed a total of two matches.

“If we use one match to light the end of this Us Weekly then we can use it to light the other candles,” I said, feeling like a lady Bear Grylls.

We managed to light a small fire that kept us warm through the night. We had this.

Glynnis fell right to sleep, but I stayed awake, staring out the window at the black hills. I rolled over and dug my phone out of the bottom of my backpack. It had maybe a bar of service. I texted Nick.

“Are you sad that this is over? The first year? That our adventure is ending?” I wrote. After this trip, we had no more plane tickets booked, no trips planned.

I closed my eyes and waited to see if the message would send.

His reply came just as I drifted off to sleep.

4 comments on "Why you should travel without your spouse"