We are telling the stories behind some of the foods and drinks guests can enjoy inflight, highlighting companies whose sustainable business practices help Alaska “Fly Greener.” These businesses also offer unique experiences in West Coast destinations we love to visit. Today, we are featuring Seattle Chocolate, whose truffles are included in Alaska’s fruit and cheese platters – the most popular item on the inflight menu. Their jcoco-branded bars are also thank-you gifts for Mileage Plan MVP Gold members. The Seattle Chocolate factory celebrates the magic of chocolate-making in its daily tours – and just in time for holiday gifts, the company’s anniversary party and sale is coming up Dec. 12.

The Seattle Chocolate factory R&D lab has conjured flavors inspired by travels to Peru and Mexico – but the team’s creative ideas for chocolate bars can come from anywhere. Even a salad.

“The people drawn to work here are naturally innovative,” says Jean Thompson, owner and CEO of Seattle Chocolate since 2002 – and the “J” in the company’s jcoco line of culinary-inspired chocolate bars. “For jcoco, we strive to include whole ingredients that are worthy of a fine restaurant’s menu and combine them with a chocolate that complements and enhances their natural flavors. Our Fig Pistachio bar was absolutely inspired by a delicious salad!” 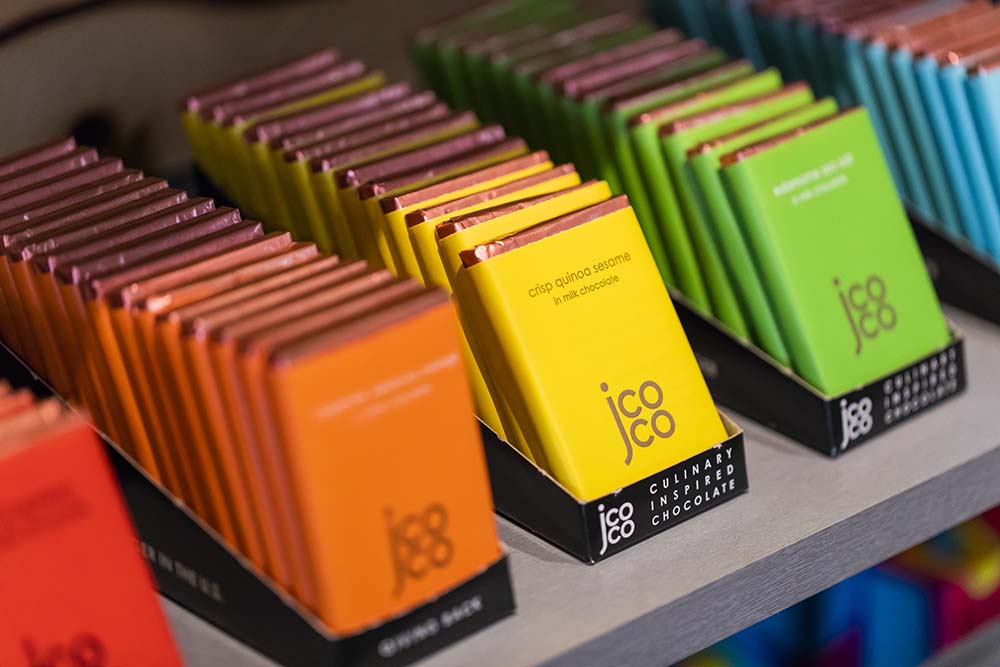 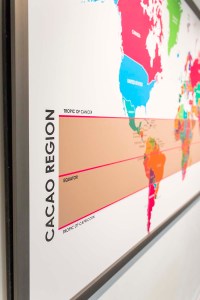 And jcoco’s newest flavor actually traces its origin to a flight on Alaska Airlines. Jonathan Kreiss-Tomkins, an Alaska state representative from Sitka, was one of the Mileage Plan elite members who received a jcoco Bali Sea Salt Toffee bar inflight last year. Kreiss-Tomkins wrote to Thompson – “I like chocolate. I love your product.” – and urged her to consider sourcing sea salt from Sitka’s Alaska Pure Sea Salt company.

Thompson thought “Why not?” Her team developed the bar, and a panel of Alaska Airlines guests were invited to the taste test. In January, the limited-edition Alaska Smoked Sea Salt dark chocolate jcoco bars will make their inflight debut. “It’s a nod to Alaska– to the airline and the state,” Thompson says. “It’s a fun and delicious Pacific Northwest collaboration.” 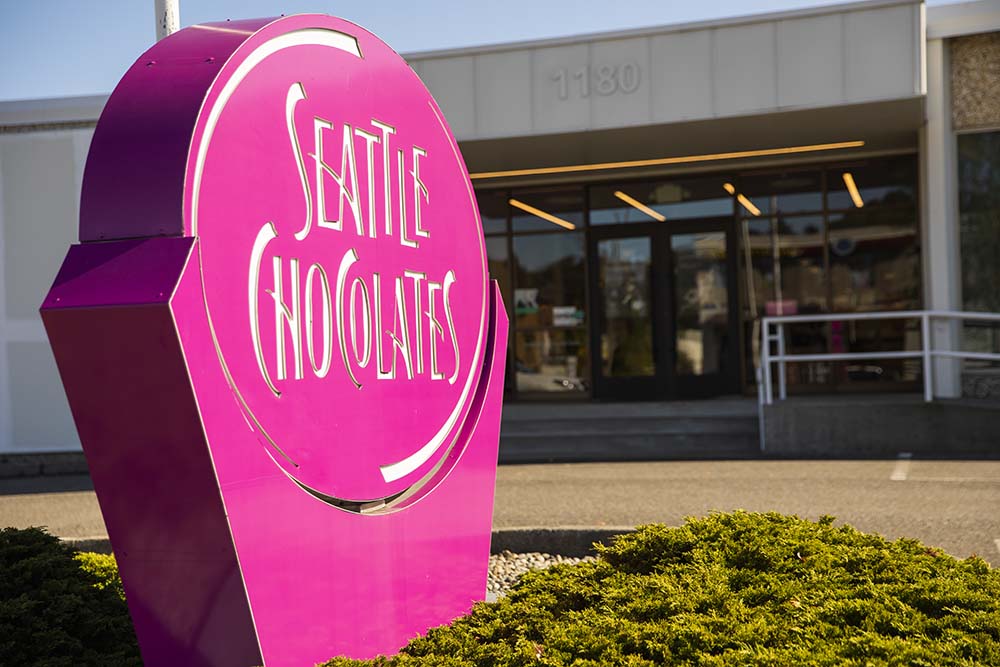 Seattle Chocolate and Alaska Airlines, whose headquarters are just a few miles apart, have been partners since 2013 – a relationship Thompson says is strengthened by the companies’ shared values. “Both companies care a lot about sustainability, philanthropy, sourcing local and place a high priority on customer service,” she says.

Thompson’s office is just steps away from the factory floor, where a mural of Lucille Ball in her chef’s hat greets touring visitors like a patron saint – and samples can be savored while watching truffle centers march under a chocolate waterfall. The CEO took time this fall to reflect on the challenges of running a chocolate company, the impetus to incorporate sustainable business practices into the operation and the joys of creating a product that reflects her own tastes and passions. 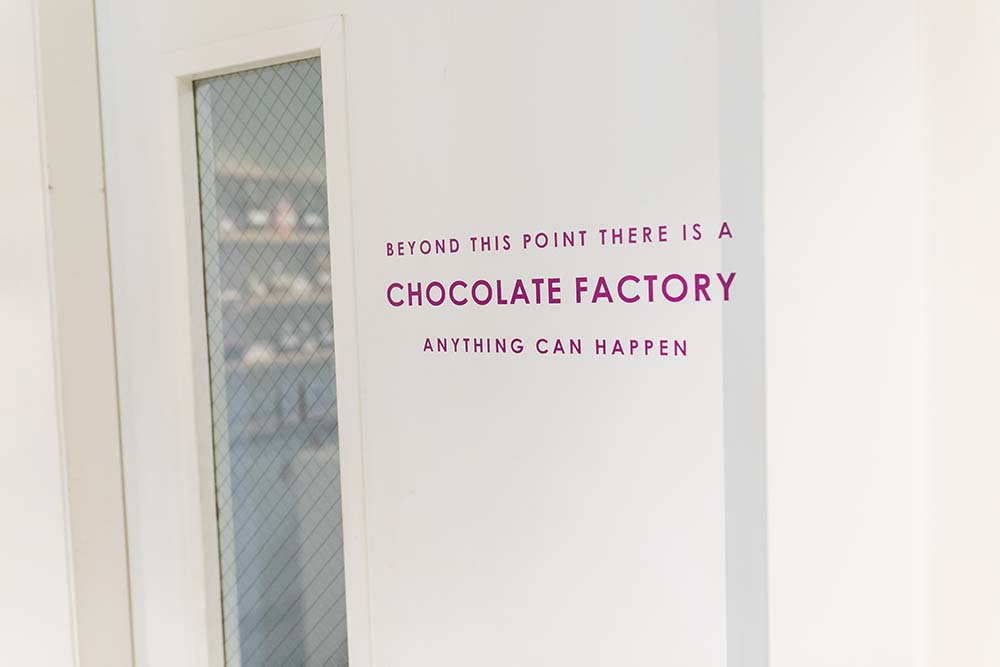 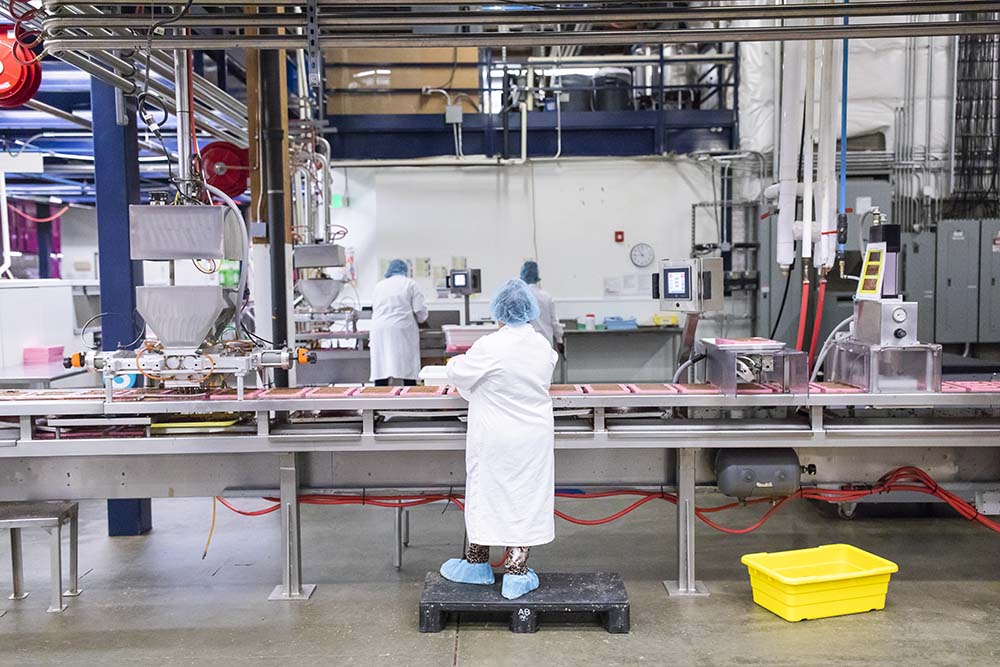 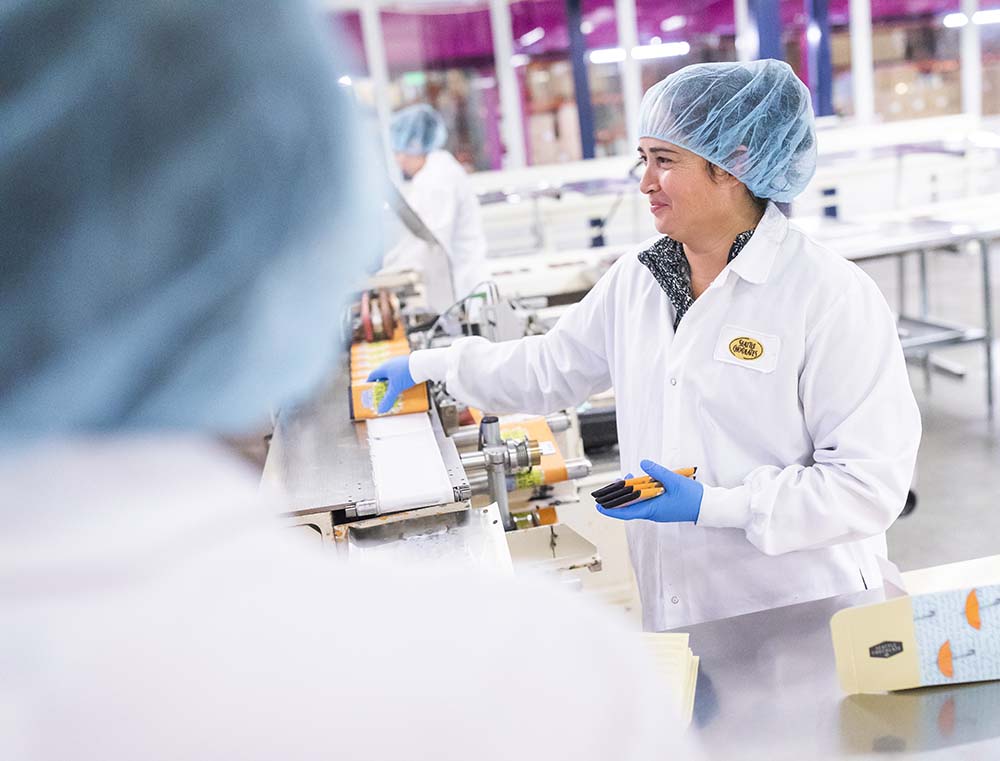 You were an early investor in Seattle Chocolate in the 1990s – but when you became CEO in 2002, you had no experience in running a company. Was it challenging to suddenly be in charge?

Jean Thompson: “Seattle Chocolate was the first manufacturing facility, or warehouse other than Costco, I had ever stepped foot in. I had no idea how hard it would be, and ignorance and optimism were my friend. I was the target audience – about 40 years old, a huge chocoholic and right in the sweet spot of who were trying to target. I thought, ‘How hard can it be?’ And that was all it took to take the leap. I’ve always been a bit of a risk-taker, and we really didn’t have anything to lose. I also did not have anybody to answer to as the sole owner of the company, which was very helpful to me. I only had financial accountability to myself.”

Your background from Microsoft was on the marketing and communications side. What was it like to learn to lead a manufacturing company?

Thompson: “I still have passion around design and marketing – but the manufacturing was interesting and challenging because there’s always a problem or hiccup to solve. I get a lot of satisfaction from the fact that we are manufacturing here in Tukwila and providing jobs for 75 families; that feels really good.” 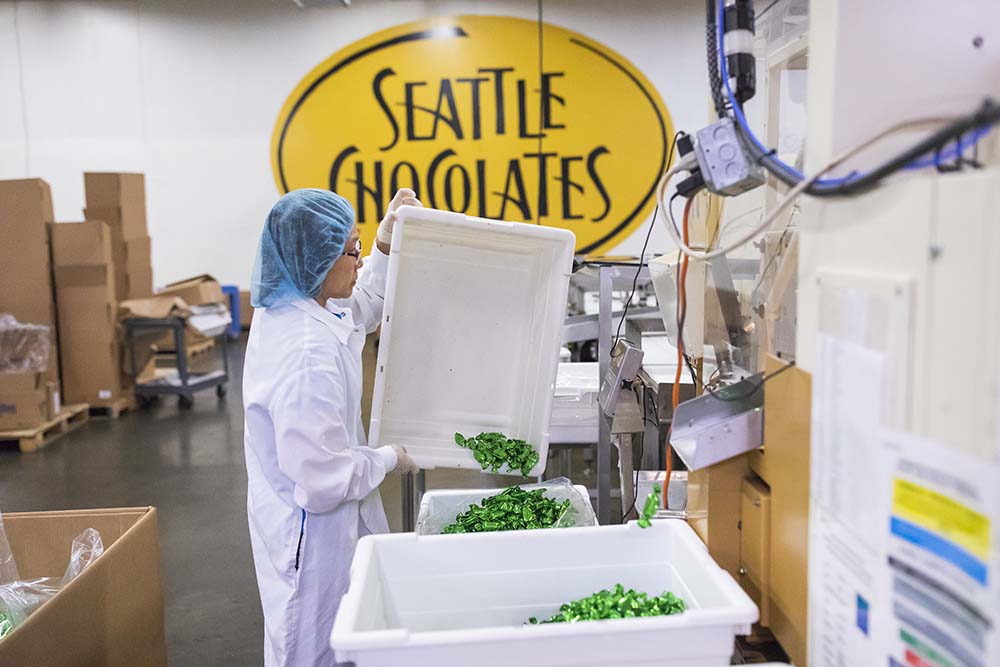 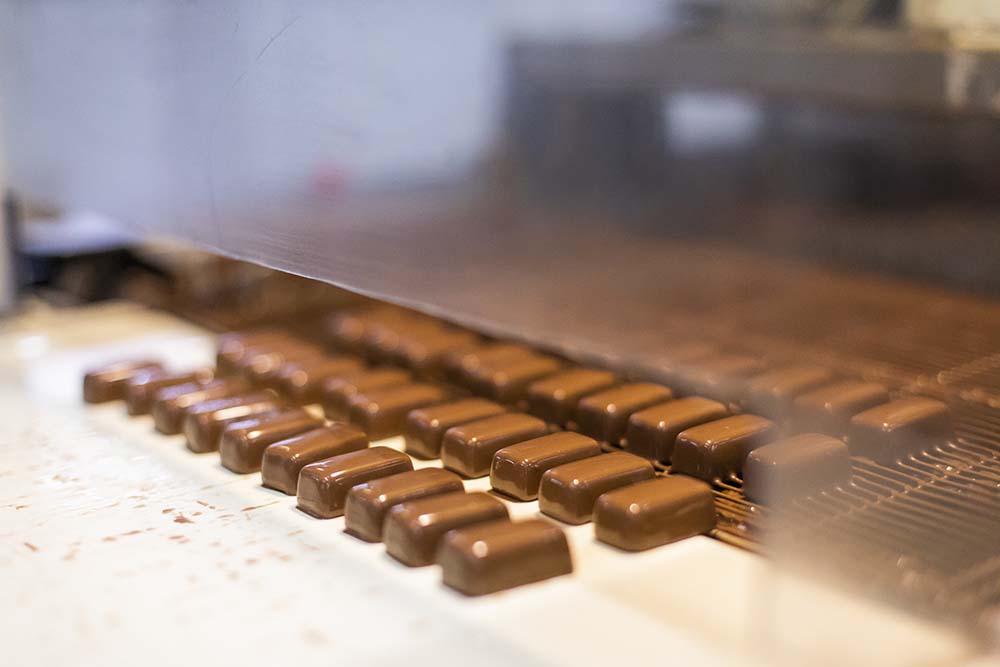 Most of the wrappers on the Seattle Chocolate truffles are now compostable – and next year, they all will be. How did it become important to you to make factory operations more eco-friendly?

Thompson: “I went to Brazil on a cocoa exploration, and I learned that the palm oil which we were using in our truffles to make that soft center was actually the most devastating thing to the rainforest. I was mortified. I immediately went back to the factory and switched to coconut oil. Once I became aware of what we were doing to the planet, I couldn’t turn a blind eye and do nothing.” 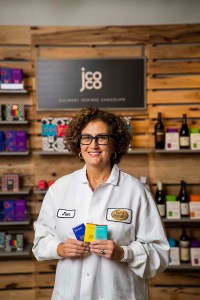 You introduced the premium jcoco bars in 2012. What influenced you to craft a culinary-focused style of chocolate?

Thompson: “It was at the tail end of the recession, and we didn’t want to shy away from providing consumers with a high-end premium chocolate that would be an affordable everyday luxury that also took consumers on a culinary journey around the world. Our Black Fig Pistachio bar is a nod to the Middle East, the Quinoa Sesame was inspired by a trip to Peru and the Edamame Sea Salt bar was a result of a trip to Japan.” 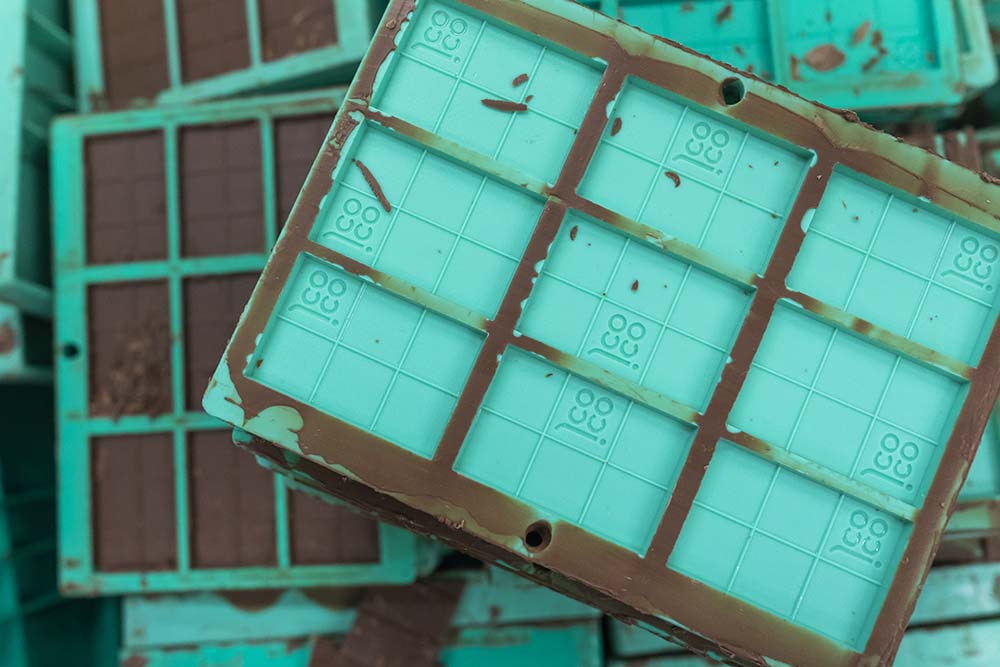 How did you come up with jcoco’s mission to give back to the community?

Thompson: “Chocolate is America’s favorite flavor and people buy it every day. We wanted to take advantage of that popularity and do something good for our community. Since chocolate is a food, we decided to donate to American food banks and help in the mission to stomp out hunger. One in six Americans is food-challenged and we can lend a helping hand as they’re going through a rough time. I am really proud of that mission. We’ve served almost 4 million servings of fresh food to San Francisco-Marin Food Bank, Food Bank for New York City and Northwest Harvest right down the road.” 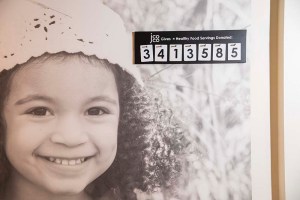 Do the jcoco bars feel especially personal to you, carrying a part of your name in the brand?

Thompson: “In every single thing that we produce here, I feel that personal attachment. There’s not a single product that leaves the store – from the design to the taste – that I don’t love. In a way, it’s our brand promise to the consumer: If you are aligned with me in terms of what you like, then you’re always going to like our products. That’s all I can offer: something that I’m proud of and happy to share with our consumers.”

The tours include education around how to taste chocolate. What inspired that approach?

Thompson: “I realized that people don’t understand how complex chocolate can be. The nuances and the flavor and the journey are every bit as sophisticated as wine. We want to elevate the discussion and the understanding of chocolate beyond the candy aisle. So many people don’t know anything about their favorite flavor; that it’s a fermented crop with so many varieties and that no two dark chocolates taste the same because of all the different variables and processes involved. We thought opening our factory to tours and educating and starting a dialogue with our consumers would be a great way to elevate the dialogue around chocolate.” 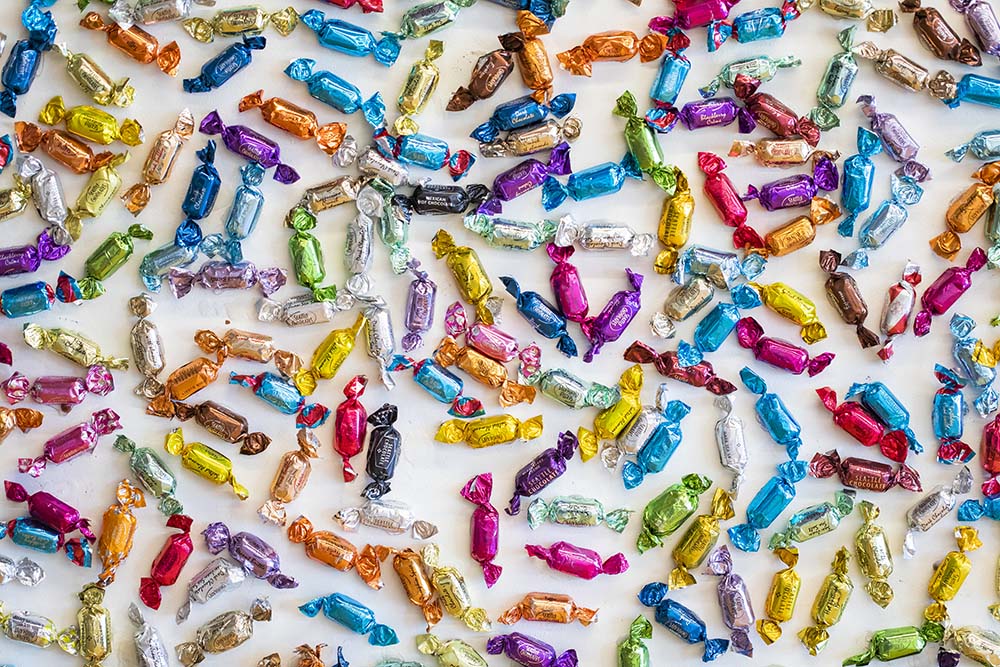 What are your favorite flavors?

Thompson: “I know you’re not supposed to have favorite children, but I really love the Mexican Hot Chocolate right now; I’m a bit obsessed. It’s salt, fat, acid, heat. It’s magical. The Veracruz Orange in the jcoco line also has that magical combination of taste sensations, but in a white chocolate. And of course, I love the Quinoa Sesame bar. It’s like a foodie Nestle Crunch bar.” 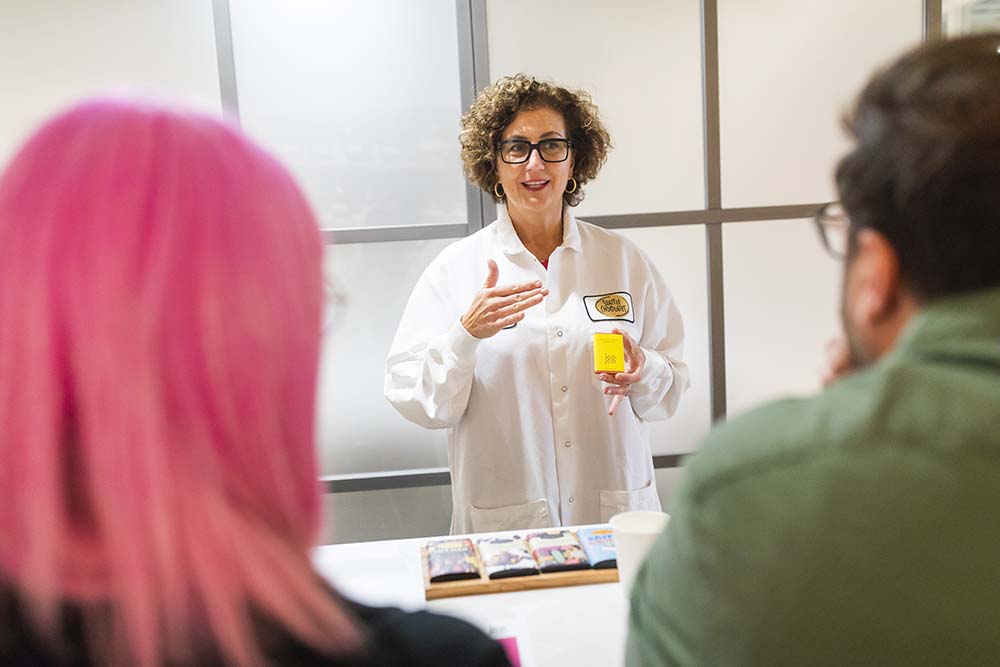 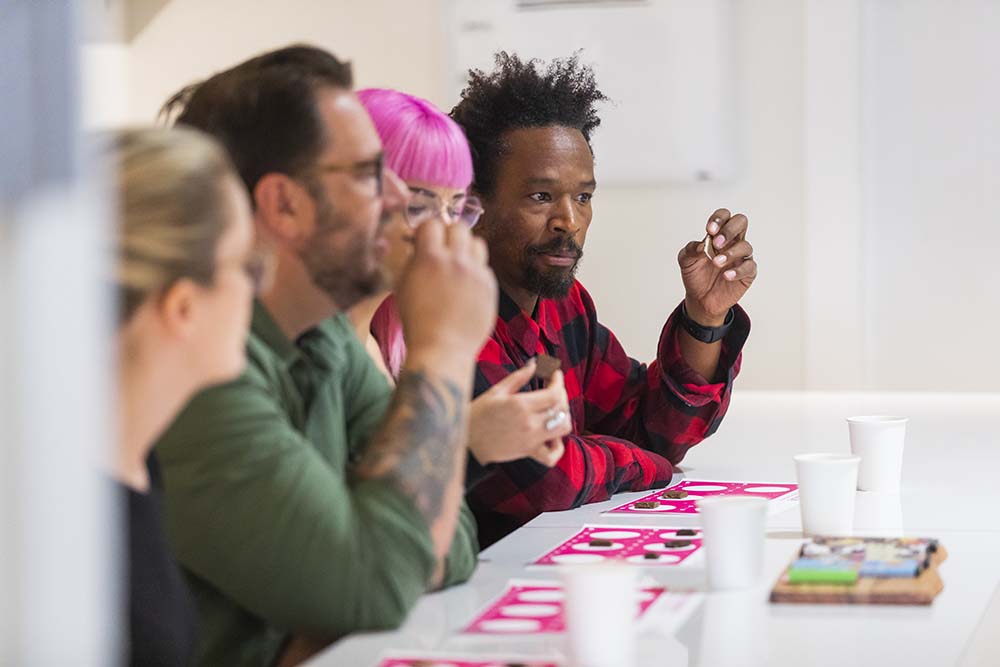 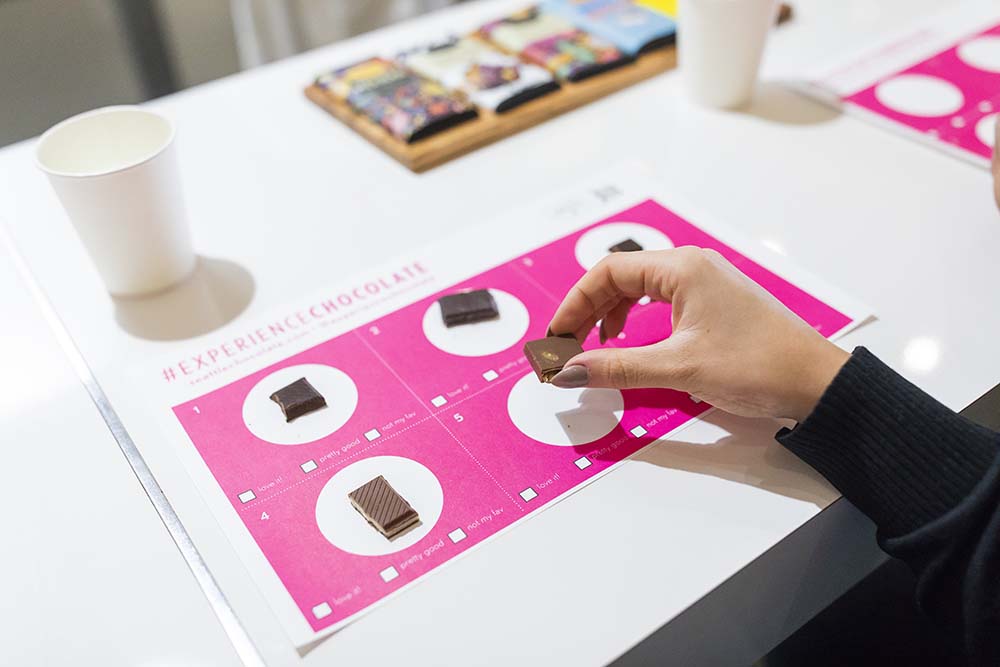 You’re an Alaska MVP Gold member, too. What do you enjoy most about seeing other Alaska guests enjoying Seattle Chocolate truffles and jcoco bars on a flight?

Thompson: “Our number one purpose, we’ve decided, is to brighten people’s days. Yes, it’s about making good chocolate – but why? Well, at the end of the day, it really is about brightening people’s days. Because when they get that jcoco bar on Alaska Airlines or whether they come on a tour – or anytime you’re eating chocolate – it’s a bit of a bright spot. That’s what we live for.”

When we say #SweeterRewards, we mean it. Our newest inflight treat for Mileage Plan Gold & Gold 75K members is a delicious bar of @jcocoChocolate in Crisp Quinoa Sesame. 🍫🏆 pic.twitter.com/zkToHTIPZ4

Others who help us Fly Greener:

3 comments on "Seattle Chocolate: “A culinary journey around the world”"

Seattle Chocolate is one of Alaska Airlines’ food and beverage partners that help us “Fly Greener” – part of Alaska’s values around creating lift for our people, our communities and our planet. Learn more and read the report