Working hard, and well into the night, has never been an issue for TJ Spring, a 20-year Alaska Airlines aircraft technician in Seattle’s Maintenance & Engineering Department. Even as a young man mowing lawns for money, he used to attach bright lights to a lawnmower so he could keep working more safely into twilight hours. Nowadays, Spring, who works night shifts for Alaska, puts the same ingenuity, work ethic and safety consciousness to good use readying airplanes for daytime flights.

It’s work that he finds deeply satisfying. “I love aviation, and I love aircraft,” Spring says. “It takes a lot to defy gravity, and it’s remarkable to be part of a team making that happen.” 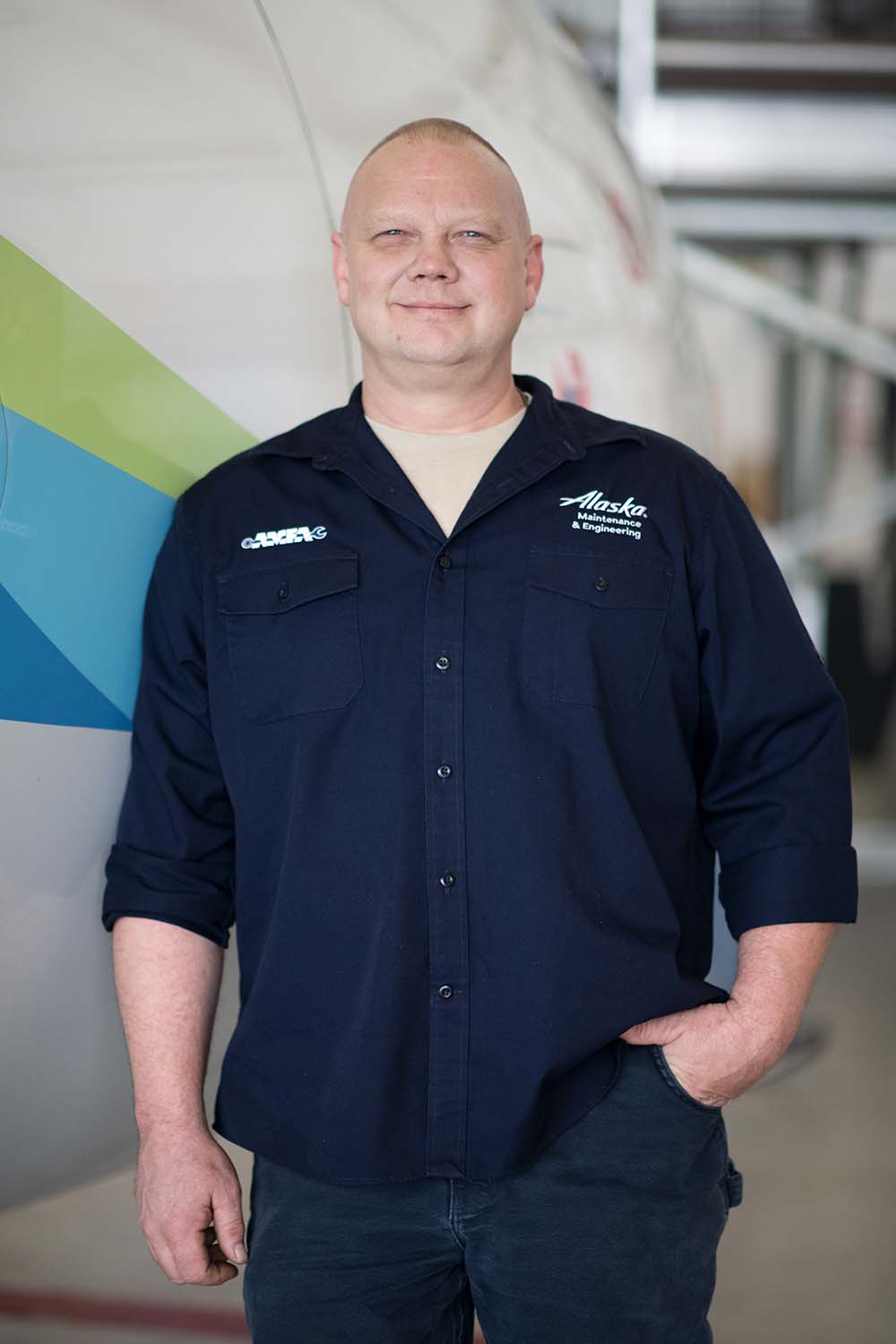 Spring began his career in the U.S. Air Force in 1991, and he later attended airframe-and-powerplant school. He served for 21 ½ years in the Air Force, Air Force Reserve and Air National Guard combined, maintaining military jets while also pursuing his airline career. On September 12, 2001, he was activated to support the nation’s air defenses, and in 2007 he volunteered for a tour in Iraq. He retired from the military in 2012 as a master sergeant.

Known for his technical expertise, Spring has played a key role for Alaska Airlines at the Aerospace Maintenance Competition, which brings together more than 70 international teams for events that resemble pit-stop repairs. Spring was on a team for four years that placed highly each year and won the overall contest in 2016.

As a member of Alaska’s Continuous Improvement Team, Spring meets monthly with co-workers from across the company to discuss ways maintenance can be done even better.

Outside of work, Spring volunteers at Alaska’s community Aviation Day and chairs a student-exchange program between his hometown area of Kent–Auburn, and its sister city, Tamba, Japan. He’s also the father of two grown daughters.

What do you like most about your job? I like identifying a problem, fixing it and knowing it’s fixed. To me, an aircraft is a living entity—with systems similar to bone structures and circulatory systems. Being able to diagnose and fix those systems is really what it’s all about.

What do you see as your role in providing service to Alaska Airlines guests? It comes down to efficiently delivering the safest, most reliable aircraft that we can. The entire airline is built on its aircraft.

What advice do you have for new hires? Being an aircraft technician is a lifestyle decision. You have to love the job, be willing to work long hours, and consider accuracy, time management, safety and doing a job correctly every single time.

What are your favorite places to travel? One favorite was Florida—we took a really good family trip to see Disney World and Universal Orlando. I’m from Upstate New York, and my wife’s family is in Las Vegas, so we get to those places, too.

“When TJ is working a problem, you can consider it done. Along with his aircraft knowledge, TJ has a positive attitude—no job is too small or too big for him. He’s the first one on the job, the last to leave and always ready to help.” —William M., Lead Aircraft Technician, Seattle

“We always used to joke that the hardest-working guy is the dirtiest, and TJ is hands-down the dirtiest mechanic out on the floor.” —Ernest Y., Senior Engineer, Seattle

“TJ brings a wealth of knowledge and skill to the task of fixing airplanes. He never misses an opportunity to help others when his work is complete. He’s always available for questions, listening, and giving helpful, directed feedback.” —Tom A., Director, QA and Regulatory Compliance, Seattle

“He is just all around a great human being and one who keeps the Spirit of Alaska alive in the sky.” —Robert N., Line Aircraft Technician Trainer, Seattle

Alaska Airlines employees such as TJ Spring are the reason for our excellence. Join us in creating an airline people love. Visit alaskaair.jobs.