To be a Black travel professional in today’s industry still comes with microaggressions and bias even in 2021. Fighting for equal opportunities, pay and the need to constantly break negative stereotypes toward people of color can be emotionally exhausting. But as a diversity travel consultant, I understand there’s an opportunity for the industry to create a reality where everyone sees themselves, feels they belong and can be their absolute best. It takes admitting there is a problem, awareness of all people and a commitment to change and support from leadership, and progressive plans of action. Celebrating diversity isn’t always easy or comfortable, but in the words of Dr. Martin Luther King Jr., “The time is always right, to do what’s right.”

When I first saw Alaska Airlines’ Our Commitment aircraft, my cheeks blushed and my eyes filled with tears. I was so overwhelmed by the magnitude of what I was seeing. For the first time as a Black woman, avid traveler, and passionate advocate for diversity in the travel industry, I was speechless at what I saw on my computer screen. The only word I could utter out was ‘WOW.’ All I could think to myself was, ‘all it takes is one plane.’

As the daughter of an airline employee, I’ve flown avidly for over 25 years. I’ve seen many aircraft designs from Disney characters to NFL teams, but never one like this. From the plane’s exceptional design to its overall significance, I walked into the hanger, extremely grateful for the opportunity to experience such a moment. A moment created from a 15+ year partnership between Alaska and UNCF to celebrate both education and the chance to experience a good one.

When Alaska revealed the plane, it was incredible. I mentally took note of each child’s face as they found their profile on the plane, and the feeling we all felt was priceless. ‘’How does it feel to see yourself?‘’ I asked Dominique, a student featured on the plane. ‘’This is so cool. I’m excited!’’ she replied. Like Dominique, I am an Oakland native; it was like looking at myself in the mirror. Dominique says she hopes to attend Morgan State University, a Historically Black College in Baltimore, which ironically holds a special place in my heart. Morgan State was my first job out of graduate school, teaching in the fashion department as the youngest professor on campus at age 25. Her passion, excitement and interest in the HBCU experience became a full-circle moment for me when she asked, ‘’What is the best part about attending an HBCU?’’ I thought about it, and told her how she knows being from Oakland, a lot of kids don’t get the opportunity to go far due to lack of resources, so seeing Black students who want to be at school and are serious about their education is the best and most rewarding part.

Since the start of its partnership with UNCF, Alaska and its guests have contributed more than 13.4 million miles to fly students to HBCUs for college tours, career development events and other UNCF programs. As part of the Our Commitment aircraft, Alaska will also be donating one million miles annually to support students attending HBCUs and established a scholarship fund through UNCF to help students overcome the financial obstacles of getting a college education. As an HBCU alum of North Carolina A&T State University, I understand how much of an impact this has on students and their families or support systems. As a California native, attending college on the East Coast, I saw my classmates have to stay on campus during breaks because their families couldn’t afford the plane tickets home. I’ve seen students transfer to closer institutions because paying for flights wasn’t easy for some families. This initiative indeed changes lives and gives access to those students who are our future leaders and game-changers. 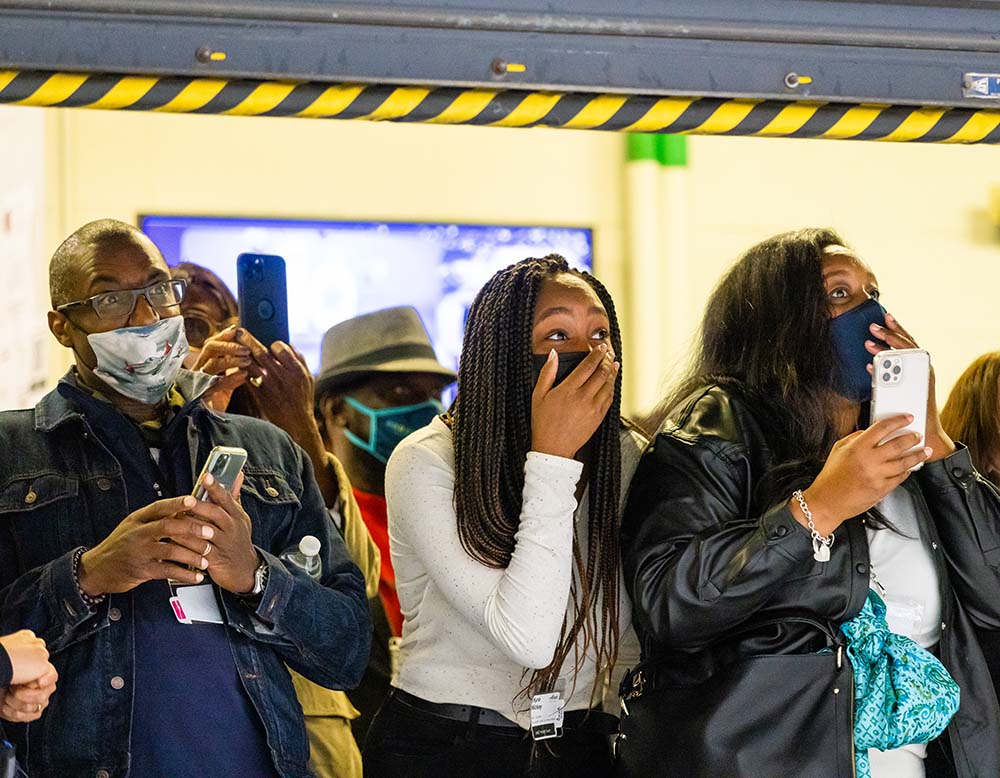 The reveal was mind-blowing, but my anticipation of flying on its special charter flight on Monday, April 26, before it enters passenger service the following day, is high! Never before have I seen an all-Black crew or have had the opportunity to experience a journey that is 90% filled with Black passengers.

During the reveal, I met Alaska First Officer Christopher Jones, who told me on a route back to Baltimore last week for the first time in his two-year Alaska career, he and another Black pilot were in the cockpit. He said he felt so proud in that moment, and I know it’s exactly how I will feel. For the first time, I know I will feel completely comfortable on a plane. I know I can be myself. Nobody will ask to touch my hair; nobody will be shocked that I, a Black woman, travels as frequently as I do. I don’t have to experience someone not wanting to sit next to me because of the color of my skin (yes, it happens). Nobody will say, “you speak so well and poised,’’ as if that is shocking. And to top it all off, I will be on a plane with the 14 Black faces of the children, grandchildren and mentees of Alaska’s employees featured on the aircraft. A dream I don’t have to wake up from.

Alaska might have more work ahead to advance diversity, equity and inclusion, but still, it is clear to me they are committed to creating a culture of belonging and opportunity for its guests, employees and communities. Working in this industry, I can quickly identify when a brand is performative, and I am proud to say nothing about this initiative is that. I sincerely feel like ‘’Alaska gets it, and that is one of the best feelings in the world. Alaska says the aircraft symbolizes their journey to making Alaska a place where everyone feels like they belong. For me, it symbolizes a shift in the industry where a brand is willing to step up and lead by example. That is impeccable, and the bar has been set. All it takes is one plane to change the narrative.

Alaska Airlines takes education and equity to the skies
Who are the people on the aircraft?
Diversity, Equity & Inclusion progress
The importance of HBCUs and UNCF