Several times each year, Alaska’s social media team sees an influx of bogus promotions from websites pretending to be Alaska Airlines. These websites claim to offer free roundtrip tickets, but these are scams that are not affiliated with Alaska Airlines and may put you at risk for computer viruses or identity theft. How can you tell a legitimate promotion from a scam promotion? Here are a few things to look out for before you decide to enter a contest.

Update 1/7/18: We have a SCAM promotion (see below) making the rounds. Please do not share this promotion. We will work towards getting it shut down. 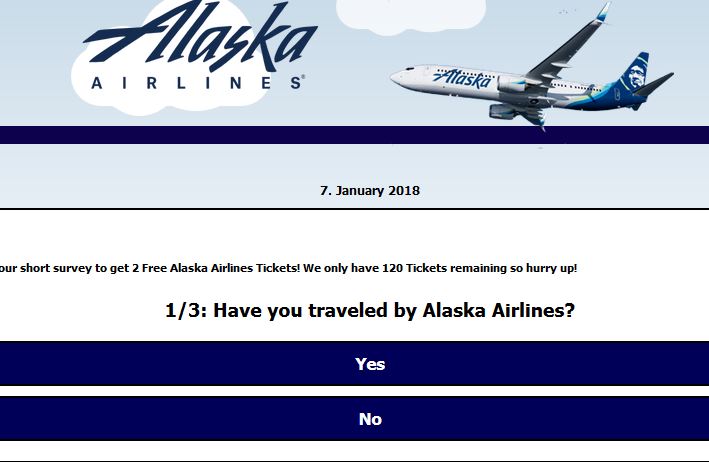 Key indicators of a real promotion 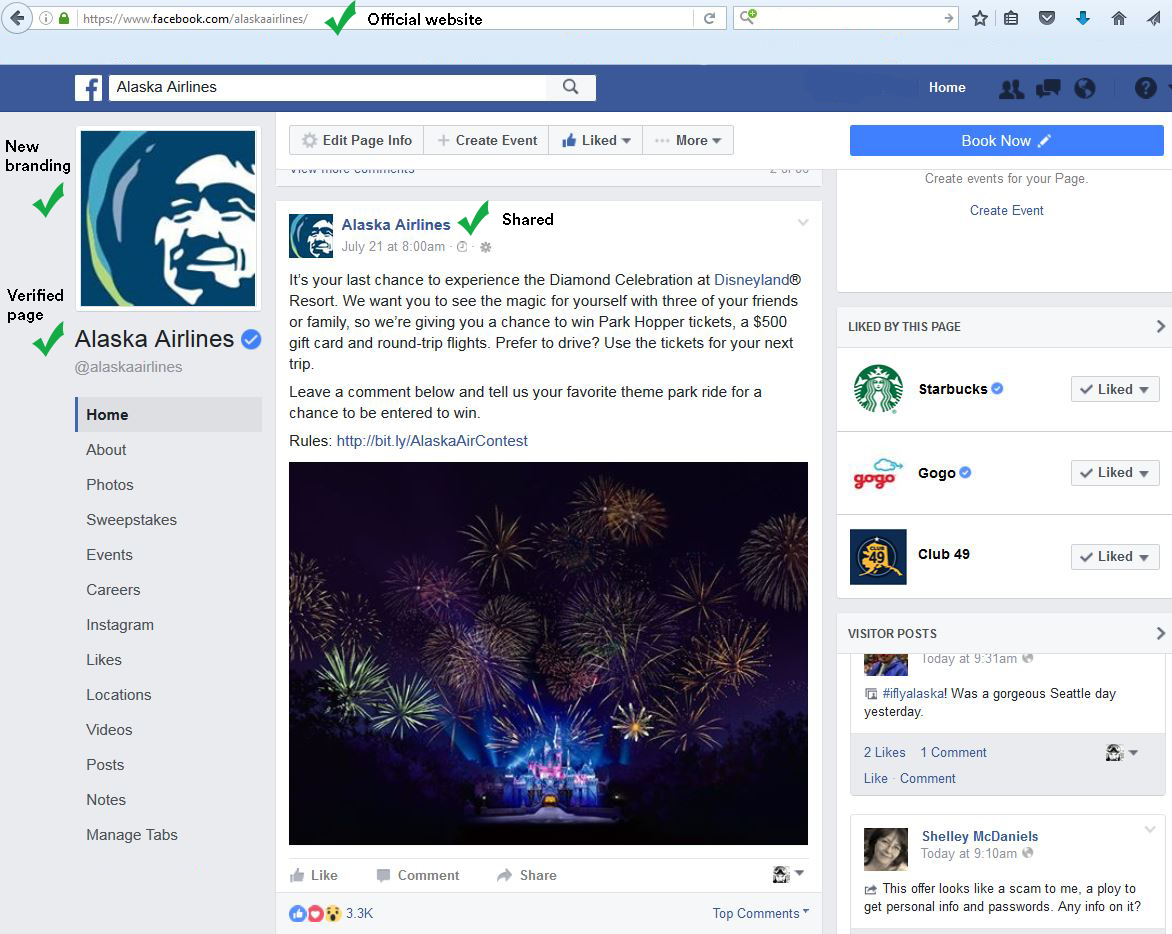 1. Alaska shares it! If you see Alaska’s official social media accounts sharing the contest, then it is indeed legitimate. Alaska’s official Facebook page can be found at facebook.com/alaskaairlines and features a verified blue check mark next to the name. This mark indicates Facebook has confirmed this is the official page representing the brand.

2. Official rules are prominent. Every contest Alaska features or partners on with a third-party, will always feature official rules in the original post or on the contest landing page.

3. It uses current branding. Earlier this year Alaska updated its logo and the face on the tail of its airplanes. Outdated branding is a sure sign of a fake contest.

Key indicators of a fake promotion

1. Use of outdated branding. If you see a contest using old branding, it has not been approved by Alaska and is likely a fake promotion.

2. Not hosted on Alaska’s website. If you are sent to a website that is not alaskaair.com, promoted from alaskaair.com and/or does not have any affiliation or links to Alaska’s official websites, then it could be a fake promotion. Send Alaska a direct message on Facebook or Twitter if you have a question about a possible scam promotion.

3. No official rules anywhere. This is a big one. If the contest does not have an official legal rules or website, then it is likely a scam.

4. Requires an entry method. Many of the scams ask you to complete a survey, or share with a specific number of friends in order to receive a free ticket. While an official Alaska contest may offer you the opportunity to share once for a bonus entry, you will not be asked to share with 15 of your friends.

From time to time, other companies and nonprofit organizations may purchase or use donated airline tickets to run promotions that may be legitimate but are not affiliated with Alaska Airlines. When in doubt, reach out to the company to confirm before entering any personal information.

Even in these instances, these partners would still be required to use current branding, links to alaskaair.com and cite the official rules.

Still not sure if a contest is fake or real?

Send a private message or leave a comment on Alaska’s Facebook wall or send a direct message on Twitter with a screenshot of the contest. Alaska’s social care team is listening 24/7 and will help verify whether the contest is real and safe for you to enter.

If you do see a fake promotion making the rounds, please let Alaska know immediately, report the content as spam and let others know who are sharing the content. As soon as Alaska is notified of a scam promotion, the social media and legal teams work to shut it down. Sometimes it can take days or weeks to shut them down, but Alaska is working hard behind the scenes to remove them.

2 comments on "How to spot a scam ticket giveaway"