Based on the West Coast, I grew up flying Alaska Airlines. As a frequent traveler, the Mileage Plan had come in handy on more than one occasion. I used miles in college to fly between school and home, and more recently for last-minute work trips. I never imagined that through Alaska’s Global Partner program, I would be able to fly all the way to Iceland.

Forged by fire and honed by ice, Iceland is home to some of the greatest wilderness areas in Europe. The country has a small population and the vast majority of people live in Reykjavik, leaving huge expanses of land undeveloped and relatively free from human impact. The result is a visually stunning landscape with points of natural interest around every bend in the road. (And there are a lot of bends!)

But it’s not just the lack of people that makes Iceland a nature lover’s paradise. As one of the youngest landmasses on earth, it is unique among the many destinations known for their natural beauty. Alive with volcanic activity – from hot springs to steaming lava fields – Iceland has a raw elemental appeal that sticks with you long after you’ve returned home.

For all those reasons and more, Iceland has become an increasingly popular destination for outdoor lovers, adventure seekers and landscape photographers. Needless to say, Quin and I were eager to see what all the fuss was about.

As we boarded the plane, I noticed the fluffy pillows and blankets neatly folded on each first class seat. As I walked wistfully by toward the main cabin, I saw them – the same pillows and cozy blankets – waiting on every seat in the plane.

Once seated, I stretched out my legs, snuggled up in my blanket, and picked a movie from the inflight entertainment. The next thing I knew, Quin and I were walking into the Keflavík International Airport about to start our five-day Icelandic Stopover.

After the easy 8-hour flight, we arrived in Iceland just in time for a full day of exploring. We picked up our camper van and headed to the Highlands, home to Iceland’s infamous “F-Roads” and the whimsical landscapes of Landmannalaugar and Kerlingarfjöll.

While the F-Roads weren’t nearly as bad as expected, the Highlands were everything they promised to be: remote, out of this world and unlike anything we had seen.

After spending two days hiking through the Highlands, Quin and I headed south.

It didn’t take us long to understand why Iceland’s southern coast is so popular. From crashing waterfalls to towering mountains and glowing icebergs, it’s a visual feast.

We took full advantage of the midnight sun, shooting well into each night before heading to one of the local campgrounds and waking up to do it all over again. Despite the long days, our time on the southern coast flew by and, before we knew it, we were due back in Reykjavik.

But not without one last adventure. 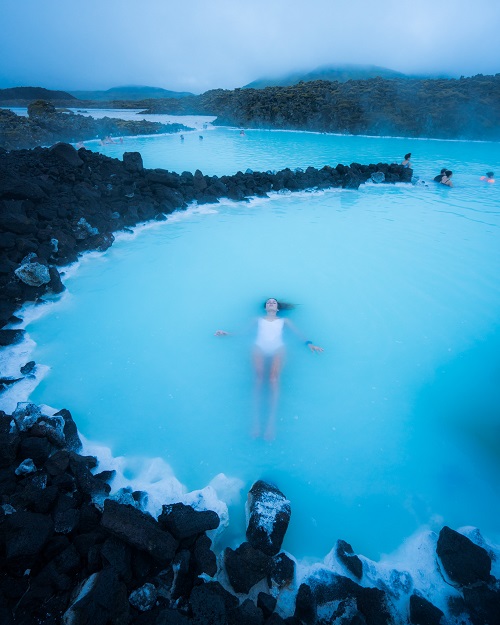 On our way to the airport, we stopped at the iconic Blue Lagoon Geothermal Spa. From a mile away, we could see the blue-tinged steam rising from the black rocks that stretched in every direction.

It was the perfect goodbye to a country that can only be described as otherworldly.

Adventure is no stranger to these two returning Wanderers, Quin Schrock and Jess Dales. From hiking through lush jungles to swimming through crystal waters, these two know how to bring nature to life on their Instagram feeds. They just returned from a global Instagram takeover in Iceland with travel partner, Icelandair. For more #worldwidewanderer posts, be sure to follow Alaska Airlines on Instagram.