“How do you become a celebrity kilt maker? The guy who makes man skirts for the cool guys?”

Howie Nicholsby, Edinburgh’s kilt maker to the stars, pours me a generous tumbler of whiskey before he answers my question.

“I ended up in rehab as part of an acid psychosis,” he says without missing a beat. “It saved my life.”

Howie comes from four generations of kilt makers and his parents have been in the kilt business in Scotland and America his entire life. They’re among a handful of high-quality, household names in the cottage industry of kilt tailors in the United Kingdom. During his childhood they outfitted Scottish festivals all over America, bringing Howie along with them. He sold socks while his parents took care of the tartans. He didn’t take to the socks. In fact, he wanted nothing to do with the family business and set off on his own to be a movie journalist instead.

“I got a taste of it. My parents had really good customers who were well-connected. My parents went to Charlton Heston’s house in the eighties and measured him for a kilt. They did a kilt for Mel Gibson for the premiere of Braveheart. But after rehab, I didn’t want to be in media anymore. I wasn’t passionate about writing about other people’s work. I wanted to do something that people would write about,” he says, taking a slug of the whiskey. The whiskey is a special blend he made himself and it’s very strong.

During his twenties, Howie returned to the family business and started to break free from traditional kilt making, experimenting with modern options —new fabrics (hemp, vinyl, denim, silk), new patterns and entirely new styles (pockets!). In his thirties he told his dad he wanted to open his own shop and 21st Century Kilts was born.

“I did a kilt for John McEnroe once. I tried to put him in a heavy tweed kilt and he said no way. But we worked it out. I found something lighter,” Howie says.

He’s even partied hard in the Playboy mansion.

“I couldn’t get Hugh Hefner in a kilt,” he says with a heavy sigh. “I tried. I was very close.”

According to Howie, a hand-sewn kilt should take several hours of fittings and twelve hours of labor, sometimes more. He only meets customers by appointment and his average kilt costs about 1,500 pounds (about $1,800). The most expensive are made of dashing tweeds and leather. Yes, leather.

Most kilts don’t have pockets, but Howie’s do. He makes detachable pockets that can be switched from the inside to the outside of a kilt depending upon the occasion.

He’s a believer in the power of numerology and will add buttons and stitches for his clients to signify their birth or wedding dates. 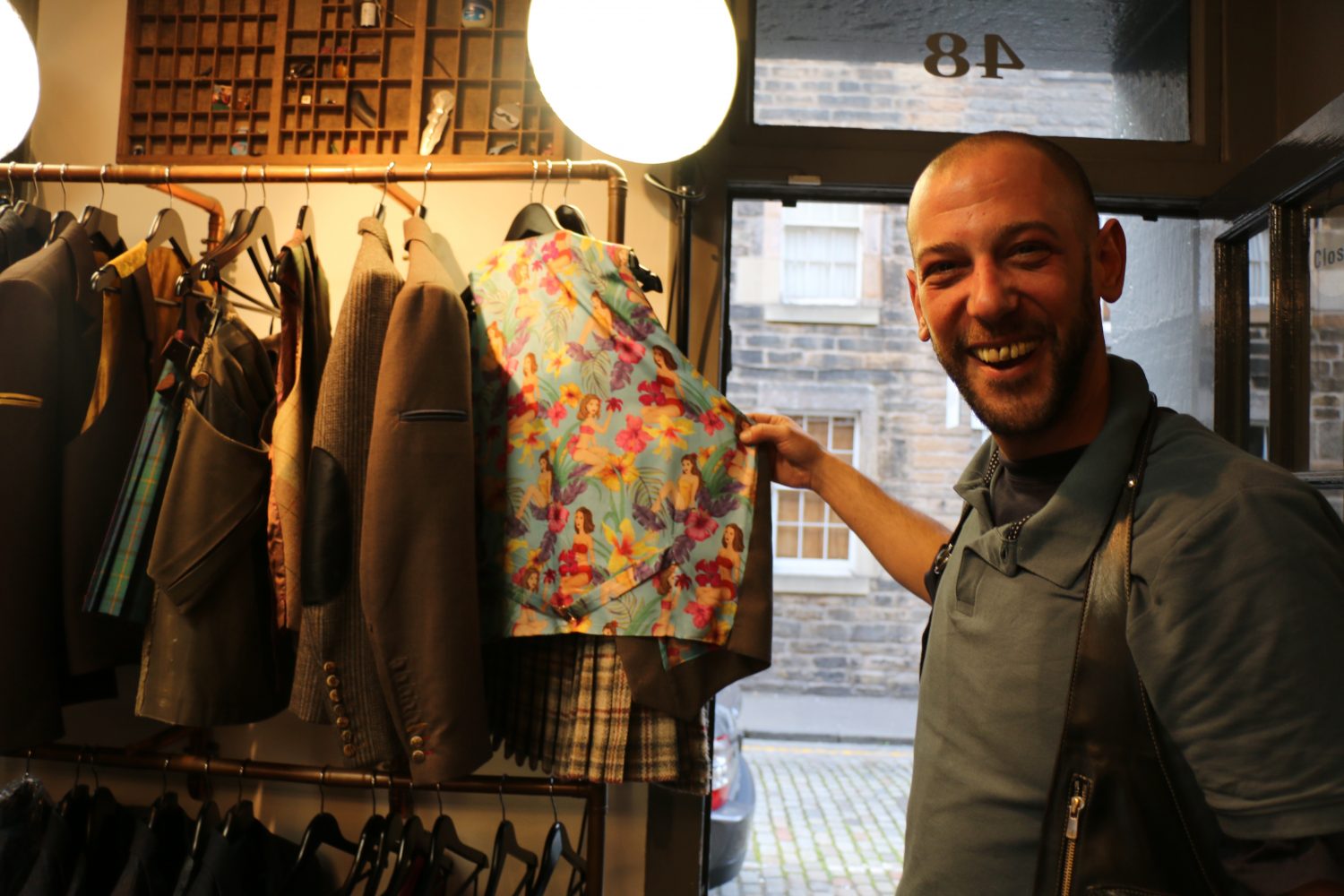 Howie’s fashioned a kilt that was worn while hiking to Everest base camp and another for a professional snowboarder to wear on the slopes, featuring tweed on the inside and waterproof nylon on the outside.

The day we meet he’s wearing one of his own creations, a bicycling kilt with reflective panels sewn along the seams. He tells me he hasn’t worn proper trousers in more than a decade.

“You should be able to wear a kilt every day,” he says. “If you have good enough self-esteem it’s a garment that just makes sense.”

More Scotland: Ye will sink! Bothy camping in the Scottish Highlands | The life and times of a full-time Loch Ness monster hunter | From glen to table: Scotland’s hunter-gatherer chef

Visit Britain with British Airways, one of Alaska’s global Mileage Plan partners. British Airways operates flights from six West Coast gateways – Seattle, San Francisco, Los Angeles, San Diego, Vancouver and San Jose – to connections throughout Europe and beyond via London. All miles flown on British Airways can be credited back to Alaska Airlines Mileage Plan to get customers to their next awards, faster.