I leap out of the pick-up truck parked haphazardly on the side of a too narrow country road and scamper up a muddy bank.

“Oh, I wasn’t talking to you,” Tom Lewis tells me. “I was yelling for the pigs. Come on girls. Get your dinner!!”

Before I can return to the truck, a hoard of hungry beasts barrel down the mountain towards Tom, kicking up mud and dung and grass in their wake, stopping just before they trample us into the ground. He dumps their food onto the mud (peelings and leftovers from the kitchens of his restaurants) and the frenzy begins. After their dinner, the pigs will roam around 80 acres. Not a bad life for a pig raised to be bacon or pulled pork in one of the top restaurants in Scotland. 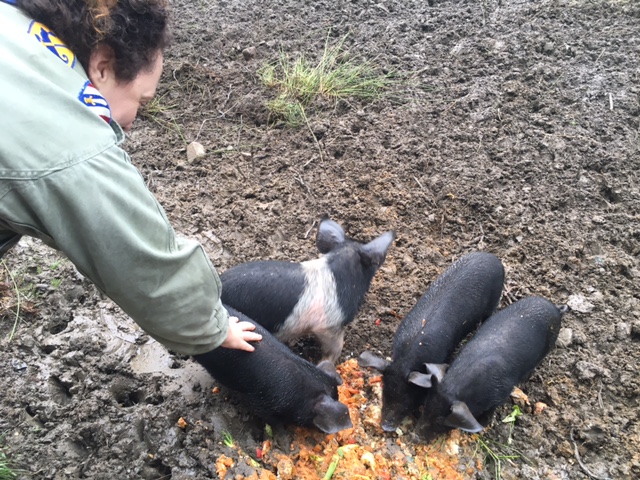 “Farmers have gotten good at producing commercial pork but nothing tastes like your own pork,” Tom remarks as he returns to the truck and wipes the muck from his boots. “Now we can go look for some mushrooms.”

Lewis isn’t widely known outside of the United Kingdom, but he’s something of a foodie celebrity in Scotland. In person he’s larger than life, telling big stories with unexpected punchlines. You want to be near him, to listen to him, to eat everything he puts in front of you. Locals call him one of the best chefs in Scotland, but he’s better known as the hunter-gatherer chef, the guy who was doing farm-to-table or field-to-plate before it was trendy.

“I do farm to table without being a jerk about it,” Lewis says. “At the end of the day it just makes more sense. We got a local guy who just shot 150 pigeons and we got them on the menu. Of course we did. We just butchered three local cows. Someone shoots some deer near here. We butcher them. All the sheep and the pigs are born on the land right here. Makes more sense!”

His Monachyle Mhor Hotel, nestled within a 2,000 acre glen in Perthshire that once belonged to the long ago exiled MacGregor clan, has become one of Britain’s top foodie destinations. His Mhor Fish, a high-end fish and chip shop and Mhor Bread, a traditional artisanal bakery, both in the village of Callander, are equally lauded.

The road, if you can call it a road, that runs through the glen to Monachyle Mhor fits just one vehicle and the average tourist takes care to drive well below 15 miles per hour. Not Tom. He rips down the path like it’s the Indy 500 and scoffs if you mention he might want to take it easy.

“We were brought up in the days when you were allowed to drink on these roads. That made it easier,” he says. I asked him if I could have a wee dram of whiskey to make it easier to be his passenger.

Tom was just 13 when his parents bought the land here on the banks of Loch Voil and began offering B&B stays in their farmhouse to earn extra money.

“My mum started the business. She’s blind. She raised three kids and did all the cooking,” he says. “She did all of it! And she couldn’t see.”

His parents sold the business to Tom when they retired in 1999 and now he runs the hospitality side of things with his wife Lisa. His brother Dick takes care of the farming and his sister Melanie oversees much of the creative operations. Even the staff who aren’t family feel like family.

“We’ve had 24 weddings from staff up here,” Tom says, beaming like a proud father.

A good year for ceps in the glen

All of a sudden Tom hits the brakes. His two dogs, a black lab named Betty and a feisty Jack Russell named Tinker grow alert.

Tom leaps out with a knife and a basket.

“The Italians call it porcini but they love giving it a fancy name to everything to make it more expensive,” he explains as he snips the fungi to take back to the kitchen. “They do that with everything. Crostini is another great example. Why don’t they just call it toast like the rest of the world?”

“It’s been a good year for ceps here in the glen. There were none last year,” he says as he spots another cluster about a half football field away and leaps over a wooden fence to get at them. “Are you coming?” he asks. I look behind me to make sure he isn’t talking to the dogs, or perhaps another cohort of pigs.

“Yeah,” I say, tentatively making my way over the fence, sinking low into a bog of mud before recovering my footing.

He hands me a mushroom fresh out of the ground. “You can try it now. You don’t have to wait for dinner.” I don’t really want to put it in my mouth, but I also don’t want to disappoint him. I nibble on the end and make my best impressed face. 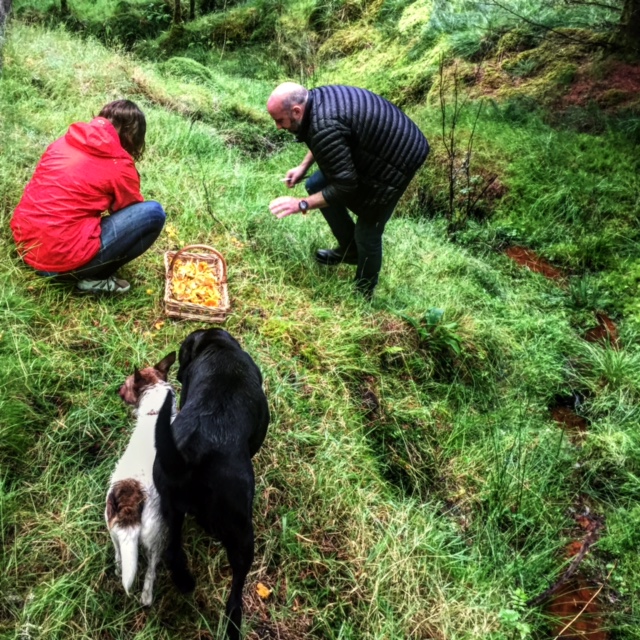 We venture deeper into the glen, the Scottish pines getting closer together, the bog getting boggier. Every few feet we’ll stop and forage. We find delicate chanterelles hiding beneath a fine layer of Scottish moss. I raise the tangerine-colored mushrooms to my nose and inhale their unexpected earthy sweetness. The berries aren’t quite ready to be picked. But in about two weeks they’ll make a delicious jam to go with local venison.

I gravitate towards a shiny orange mushroom with exciting white polka dots straight out of Alice in Wonderland, convinced Tom will be pleased with my find.

“Stop! No!” he yells. “Don’t touch that one. I know it’s pretty but you don’t want to eat it. I know a couple of guys who tried it and they had one bad trip.”

I make a mental note about the importance of foraging with someone who knows their mushrooms.

“It’s amazing how much there is to eat when you want to go out and look for it on the land,” Tom says. “But no. Do not eat that one.”

But I’m hungry and my stomach is betraying me with gurgles and growls as Tom talks about the intricate dishes he’ll prepare using what we’ve foraged. The Monachyle Mhor menu changes on a weekly, sometimes daily, basis depending on what’s fresh. But as we settle in for dinner that later night we’re treated to Inverlochlarig venison, butchered right on the property and prepared with chanterelles foraged that afternoon. The Perthshire Blackface lamb was born right down the lane and is served with braised leeks and greens from the garden. The Monachyle hen’s egg was plucked from the henhouse in the morning before being turned into a gourmet version of the classic Scotch egg.

And to top off the meal is whiskey. There’s always whiskey. Tom doesn’t believe in a person who doesn’t like whiskey.

“Those people don’t know what they’re saying,” he says. “They just haven’t found the right whiskey for them yet.” And so he brings out a half dozen different whiskeys and lets guests blend their own until they’ve found what suits their palate.

“Are you having fun?” Tom asks. I nod. This is clearly what gets the chef out of the bed in the morning, making sure that his guests are having as much fun as he is.

“Good! Everyone got really boring with food for a while. Food needs to be fun. I think we’re making it more fun.”

More Scotland: Ye will sink! Bothy camping in the Scottish Highlands | The life and times of a full-time Loch Ness monster hunter

Visit Britain with British Airways, one of Alaska’s global Mileage Plan partners. British Airways operates flights from six West Coast gateways – Seattle, San Francisco, Los Angeles, San Diego, Vancouver and San Jose – to connections throughout Europe and beyond via London. All miles flown on British Airways can be credited back to Alaska Airlines Mileage Plan to get customers to their next awards, faster.

2 comments on "From glen to table: Scotland’s hunter-gatherer chef"