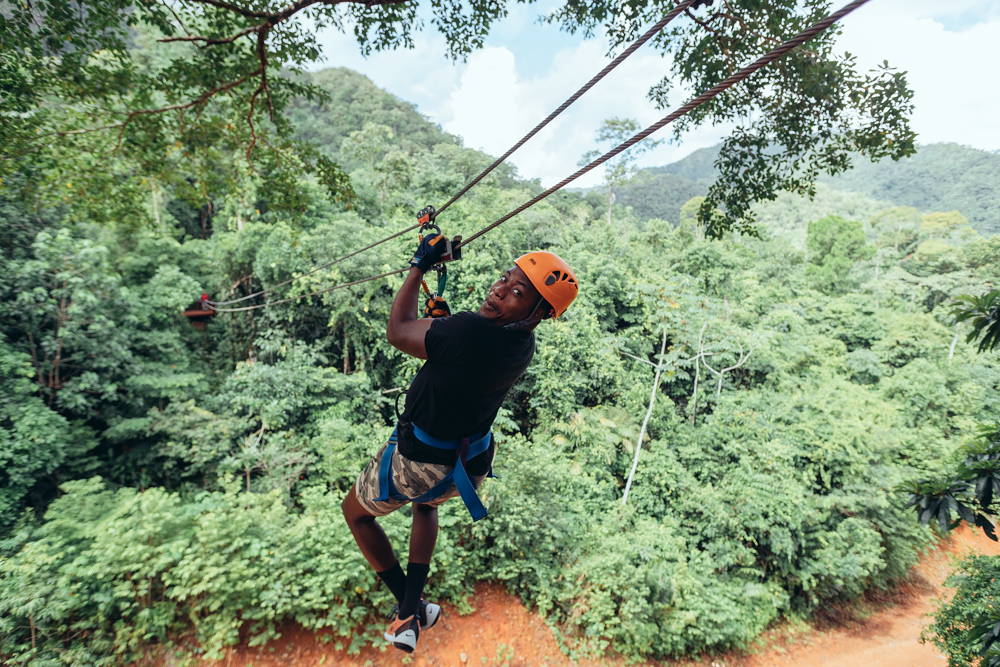 Tucked between Mexico and the Caribbean sits Belize, a tropical marvel whose unique attractions and off-the-radar experiences lure in thousands of travelers every year.

A country that’s part of Central America and the Caribbean, Belize continues to be an anomaly attracting thrill-seekers and beach bummers alike. Lush jungles grace most of its landscape, coupled with hundreds of offshore islands in the world’s second-largest barrier reef.

Check out all the things to see and do unlike any other Caribbean destination below.

What’s more adrenaline-pumping than swimming with sharks? Yep, it’s a thing. You can swim with sharks at Shark Ray Alley, located in a marine reserve, just a short boat ride away from the renowned island of Ambergris Caye.

This popular adventure has become the go-to site for snorkeling with sharks – the harmless ones, of course! Back in the day, fisherfolk cleaned their fish near this area, attracting nurse sharks and stingrays. Now, the area is a prime hang-out spot with these marine spectacles for travelers to experience and photograph. So you can don your fins and snorkeling mask, jump right in and swim alongside gentle creatures as they curiously circle the boat. Don’t worry, there’s no Jaws moment here!

Unbeknownst to many, Belize was home to one of the world’s most mysterious civilizations: the ancient Maya. Bewilderingly enough, the Maya culture is still alive and well in Belize, though its numbers are nowhere near the colossal amount it once was a millennia ago. Still, the country is peppered with archaeological Maya sites from north to south.

One of the best ancient sites to wander is Xunantunich, a Maya city that once thrived during the Classic Period. Its name, which translates to “Maiden of the Rock” or “Stone Lady,” came from an old legend where in the 1800s, a hunter from the village of San Jose Succotz said he saw the apparition of a woman at the base of the largest temple. The temple, “El Castillo,” towers at 130 feet and offers sweeping panoramic views of the meandering river below and the jungle canopies surrounding the site. Unlike other Maya cities in Mexico, you can climb these temples to the top, meaning your selfies will be out of this world!

Explore fascinating grounds below in the ATM Cave

Belize boasts vast underground cave systems, many of which are still unexplored. Some are so world-renowned, visitors come from across the world to venture into the dark, damp mysteries. The Actun Tunichil Muknal (ATM) cave is one of Belize’s most difficult caves yet most captivating. National Geographic even named it one of the Top 10 Sacred Caves in the world back in 2018! But what makes it so special? Dare to enter the tight-creviced cave and you’ll be greeted by not only Mayan pottery and artifacts but an actual Mayan skeleton purely intact. Known as the Crystal Maiden due to its crystallized form, the skeletal remains are believed to be the victim of a sacrificial ritual by the ancient Maya. Archaeologists and historians believe the Mayas may have used caves for such affairs, whereas the culture believed caves to be entrances to the underworld.

Everyone may know the island’s only town as the inspiration for Madonna’s hit song “La Isla Bonita,” but there’s more to Ambergris Caye. The party island is Belize’s most visited destination, and for good reason. Its silk-sand beaches and swaying palm trees are the epitome of a dream vacation in the tropics.

An all-year-round Spring Break destination, Ambergris Caye is beaming with stellar nightlife and straight-up island vibes. You can opt to lounge the day away planted on a beach chaise at a beachfront resort or explore the island via its ubiquitous golf carts. Either way, the food, people, and the ever-present Caribbean breeze will make it a challenge to leave.

At the heart of Belize’s Cayo District sits San Ignacio, a historic town with its own set of Maya sites and dense rainforests a stone’s throw away. About two hours away from the international airport, San Ignacio is a cultural Mecca with the warmest welcoming around. Stroll the Farmer’s Market downtown and exchange stories with the local fruit vendors.

You can also visit the Green Iguana Conservation Project at San Ignacio Resort Hotel and befriend the cute, green iguanas. Looking for a quick to-do? Make your way to the nearby Cahal Pech Maya site for a short, one-hour morning tour! The possibilities are endless.

On the southeast side of Belize lies the up-and-coming coastal village of Hopkins. This sleepy fishing village is a cultural hot spot and home to the Garifuna people of Belize. Hopkins is a great central hub, close to both the reef and rainforests and offers visitors the best of both worlds.

A perfect day in Hopkins includes a half-day snorkeling  trip to a nearby offshore island and bookending it with drumming lessons at Warasa Garifuna School. If you’re searching for something a little more steeped in nature, a half-hour drive away is Maya King Waterfall, easily accessible and a welcome respite from the tropical heat.

Know before you go

With Belize having only two seasons — wet and dry — any time is a great time to visit. However, the months of November to March are ideal as the weather is considerably cooler. This also coincides with the country’s dry season.

Book your travel to Belize

You can now fly to Belize City with Alaska Airlines from Los Angeles and Seattle!

Starting today, Alaska’s service to Belize operates four times a week between Los Angeles and Belize City (BZE) and twice weekly between Seattle and Belize City, just in time for the holiday season! You can purchase tickets here.

Photos courtesy of Belize Tourism Board.