It’s called “The Milk Run,” but could just as easily be known as “The Salmon Run” or “The Grocery Run.”

If you’re looking out the oval window of a 737, you might call it the “Peak-and-Glacier Run.”

The Milk Run refers to the daily circuit of Alaska Airlines flights that hop between towns in Southeast Alaska, serving as a lifeline for the communities that aren’t always connected by roads to the outside world.

In some ways, the Milk Run flights reflect the airline’s heritage in the state where it earned its name, and the resilient bush pilots in the 1930s who transported mail, medicine and furs to all kinds of places through most kinds of weather. These days, it helps that Alaska Airlines pioneered Required Navigation Performance procedures that allow for reliable service to some of the most weather-socked and terrain-challenged airports in Alaska.

That reliability makes a difference if you’re waiting for supplies or heading to a hospital to have a baby.

“This is the original Alaska Airlines,” said Sharon Hill, a flight attendant for 33 years who has flown the Milk Run for most of her career. “This is old school – it’s like back in the day, when we were small.”

“These are the fights that built Alaska Airlines,” added Lynn Thoreson, a flight attendant for 32 years. “The scenery is beautiful and the people are wonderful. I wouldn’t want to fly anywhere else.”

Along the way, passengers are treated to views of a rugged coastline, where jagged peaks rise from the sea and blue-ice glaciers flow back down. Mount Saint Elias, between Yakutat and Cordova, rises 18,008 feet in just 10 miles – it’s the second-highest summit in the United States.

“If you get a day that’s clear, it’s awesome,” First Officer Peter Michels said during a recent stop in Cordova. “No other jet airline in the world does flying like we do in the state of Alaska.”

Passengers are a mix of residents and outdoorsy tourists, commercial fishermen and cannery workers.

In the smaller towns, airport terminals are sturdy, utilitarian buildings with passenger waiting areas not much bigger than a double-wide trailer – no restaurants or long TSA lines. In Cordova, coffee is available on the honor system. You also won’t find baggage belts or jetways – travelers board using air stairs at the back of the plane. At these outposts, employees wear many hats. In Petersburg, for example, the station agents are jacks of all trades – rampers, customer service agents and cargo agents all in one.

“It’s very efficient and not a lot of frill,” said Caitlin Goettler, Alaska Airlines community relations coordinator in Anchorage. “I’ve always thought that it’s kind of reflective of the culture here in Alaska.”

How the Milk Run earned its name

The Milk Run flights have been living up to their nickname for many years, with Alaska Airlines delivering milk and other vital supplies to the towns it serves. Many towns in Alaska are uniquely reliant on air service, due to the lack of roads. In aviation, the term “milk run” refers to a scheduled flight with many stops, or a routine and uneventful journey.

In logistics, a milk run refers to a round trip that facilitates both distribution and collection, similar to the way a milkman delivers full bottles and picks up empties around a neighborhood. It also refers to the dairy industry practice of picking up mixed loads from different suppliers – when one tanker truck collects milk from several farmers for delivery to a central processor.

For these Alaska Airlines flights, all the definitions seem to fit. The name has stuck.

“Alaska Airlines provides freight, mail and cargo capacity that other carriers simply cannot provide,” Petersburg Mayor Mark Jensen said recently. “This is essential for communities like Petersburg, which are uniquely reliant on air service due to the lack of road connections.”

The Milk Run routes are often flown by Alaska’s five 737-400 Combi aircraft – the cabin is divided in half, with cargo up front and 72 seats in the back. A wall divides the people from the packages.

“It’s their mail, their produce, their dairy,” said Hill, the flight attendant. “They don’t have car access, so everything arrives by boat or by plane.”

On each Combi, there’s room for four cargo containers known as igloos.

During a stop in Yakutat, flight attendants Hill and Thoreson spoke of their longtime affection for the Milk Run – and all of the interesting experiences they’ve encountered along the way.

“What’s the strangest thing you’ve had up front?” Thoreson asks.

“Mine was a baby walrus and three reindeer,” Thoreson said. “The walrus kept belching and it smelled like fish.”

Tips for the Milk Run

PRO TIP: Passengers are required to stay on the aircraft during the hourlong stops at each airport, but if you’d like to spend more time checking out each town, a reservations agent can help you book a flight with 24-hour layovers in each stop along the way. Call 1-800-ALASKAAIR (1-800-252-7522).

HOW TO BUY A MILK RUN TICKET: Alaska Airlines operates about 20 nonstop flights a day between Seattle and Anchorage, but only a handful of Milk Run flights, which are intended to connect the smaller towns to each other and to the bigger cities. To reserve space for local residents, tickets aren’t sold for the full length of a Milk Run flight that starts in Seattle and ends in Anchorage, or vice versa. The best option is to book a Milk Run flight that includes Seattle or Anchorage at only one end. Check our check our Low Fare Calendar. Search by your origin city and final destination city, then scroll down to the bottom to see the flights with the most stops.

BEST VIEWS: For the best views of the coastline when flying north, find a window seat on the right side, when facing toward the front of the plane. Sit on the left side when flying south. 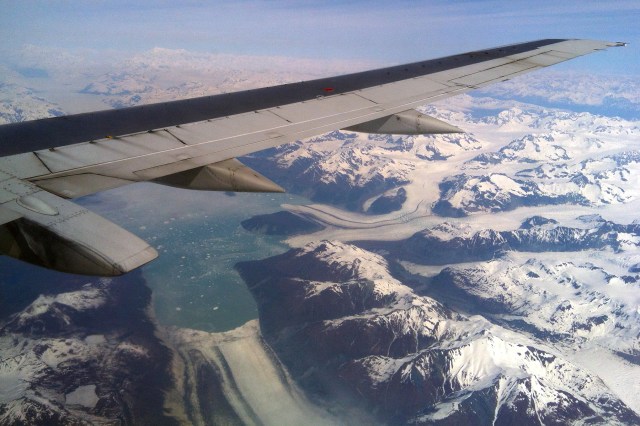 A FLIGHT THROUGH HISTORY: The Milk Run is also a walk through the history of Alaska Airlines. In 1968, Alaska Airlines picked up many of the Southeast Alaska routes by merging with both Alaska Coastal Ellis and Cordova Airlines. Alaska Coastal founder Shell Simmons and Ellis founder Bob Ellis were bush pilots and aviation legends in Southeast Alaska who later served on Alaska’s Board of Directors.  In Cordova, the airport is named after Merle “Mudhole” Smith, who was president of Cordova Airlines and joined Alaska’s Board of Directors after the airline acquired Cordova. In Petersburg, the James A. Johnson Airport is named after a former Alaska Airlines senior vice president of public affairs who was known as “Mr. Alaska Airlines” in the state.

18 comments on "The Milk Run is a hop, skip and a jump along Southeast Alaska’s coast"