Photos by Kim I. Mott

There’s more to Fiji that meets the eye than just powdery beaches and crystal-clear reefs. Here are six things that will sweeten your travel experience to the South Pacific island nation:

1. Clap once for Kava, then, three more times 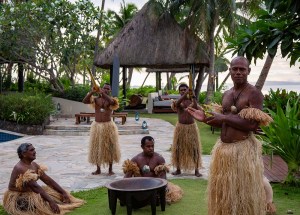 No tradition weighs more heavily on Fijian consciousness than the art of the kava ceremony, which is typically a mandatory part of being invited to any village. If lucky, you’ll have the opportunity for kava many times during your visit (and not only one set up by a resort).

Many tours and treks arrange visits to villages and kava ceremonies. Any visitors to a town must begin by asking to meet the turaga-ni-koro (village headman), who can make introductions to the ratu (chief). As visitors, you should offer a gift, or sevusevu, to get permission to visit. Unless you happen to have a whale’s tooth (a highly prized and rare, offering), powdered kava root that’s been aged four to seven years is a perfect option. 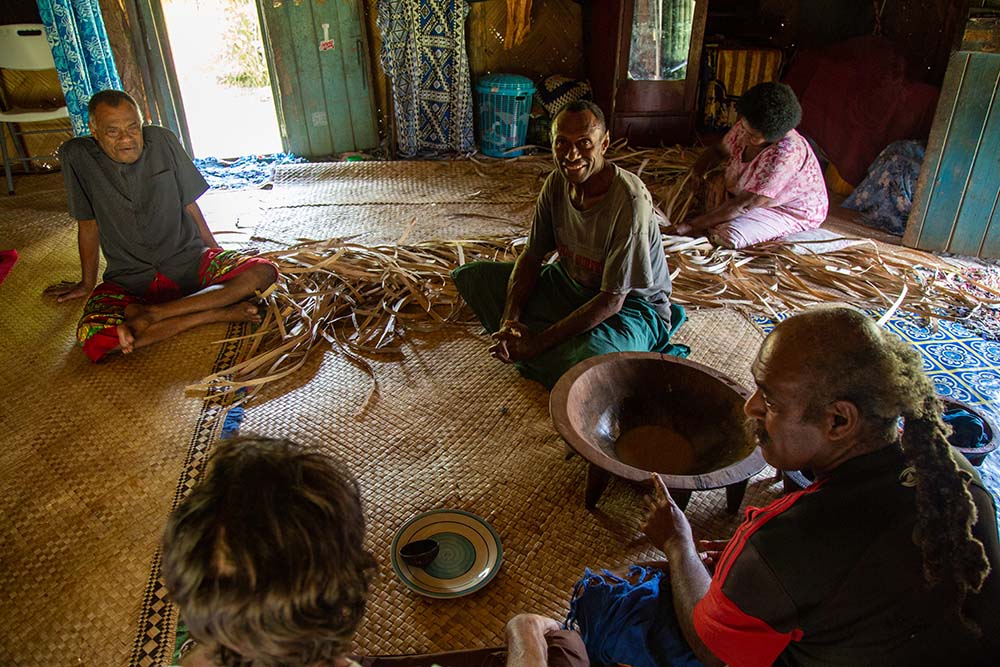 The chief will invite you into his home or into a community center where males sit cross-legged and women sit with legs to the side, as a headman (usually) mixes the kava powder with water in a wooden turtle-shaped bowl called the tanoa. It’s a slow process, and you should remain quiet (and not take photos) until the first round of drinking has been done. 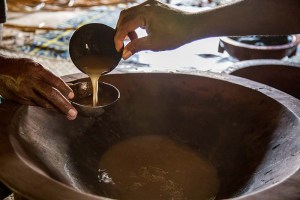 The drink – which sort of resembles muddy water – is served in a bilo cup made from a coconut shell. Clap once before receiving it, drink it fully, hand the empty cup back, and clap three more times. Kava tastes like grassy water and offers your tongue a slight tingle. It’s not alcohol but is known to be relaxing if you have many rounds.

It’s nice to explain who you are and why you’re visiting – the villagers will be interested to hear! For extra cultural-sensitivity points, keep your head lower than the chief’s, and never turn your back toward him, even when exiting. Visitors should wear a sulu sarong and refrain from wearing anything on ones’ head, like a hat or sunglasses. (But don’t worry if you make a mistake; locals are very easy-going with first-timers.)

2. It takes a village 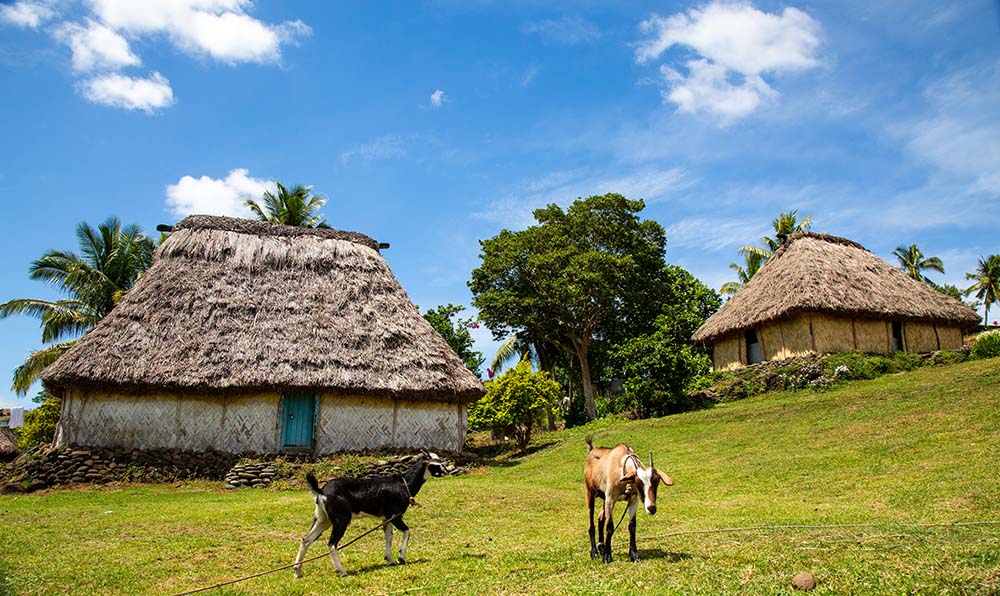 Any local will tell you; you haven’t visited Fiji until you visited one of Fiji’s nearly 1,200 koro (or villages) — where populations tend to be defined not by individuals but by mataqali (family groups). Visiting one begins by asking permission (and often a kava ceremony, see above). High-end resorts often offer village excursions (including kava, dances, handicrafts demos and a chance to buy local). It’s well worth arranging a trip to more far-flung places less used to seeing daily visitors. 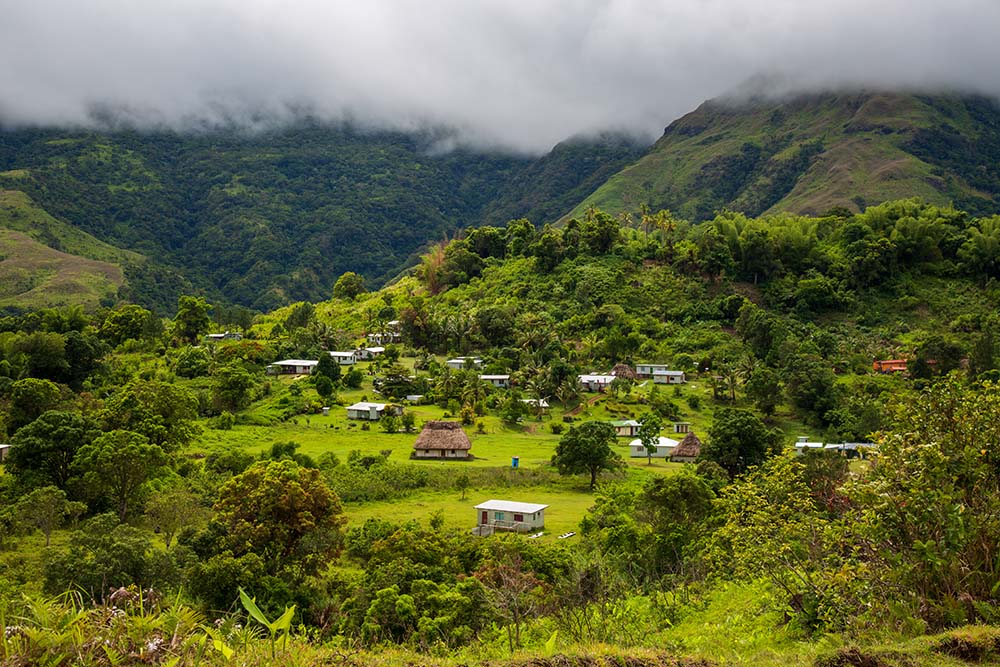 Navala in Vitu Levu’s Nausori Highlands is a village must-see. Reached from Nadi in a few hours via a snaking road that turns to gravel and weaves past sugar cane farms and along mountain ridges that envelop you slowly. Navala is Fiji’s last village made up of traditional bure thatch huts. About 200 of them line across a valley surrounded by green peaks.

For F$25, visitors can visit without prior arrangement, but you’re better off coming with a guide such as Tui from Bulou’s Lodge, a modest accommodation on the Ba River just outside town. Tui is a resident who can help set up a kava ceremony in the chief’s bure and lead you on river walks or to hidden waterfalls fed by natural springs. 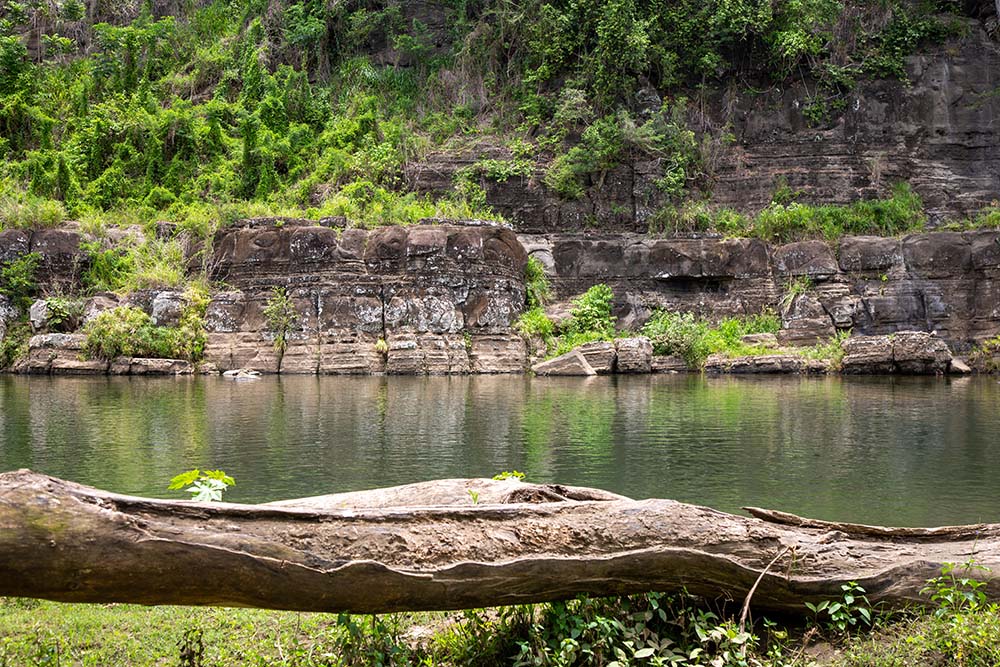 Another option to get here is a multi-day trek with village homestays via Talanoa Treks, which includes a visit to Nabutautau.

3. Look for the pink bananas 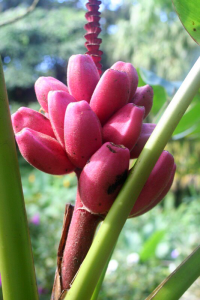 You don’t have to travel far in Fiji to see a lot. Within the 50-acre Sleeping Giant Garden, just north of Nadi Airport, you’re able to walk past a series of lifelike orchids shaped like antelopes, angel wings and dancing ladies. Near a pond where dozens of frogs sit on lily pads, and shrouded in giant green leaves, loom bunches of pink bananas (or musa velutina), a self-peeling fruit found around the South Pacific.

Fiji may be known for its blue water, but often it is green that stands out. Tussles of trees, brush, shrubs and vines tangle up mountainsides in a seemingly impenetrable canopy of varying greens that sprout from the islands’ volcanic-rich soils.

Amidst the lush landscape are 800-some species of plants found nowhere else, making for rewarding hikes (fortunately, the mongoose population handles most snakes).

The heart of green Fiji is without a doubt Tauveni Island. Known as the “Garden Island,” it’s rimmed with low-key resorts and crisscrossed with steamy hikes through the immense national park that occupies over three-quarters of the island. The best hike hugs the coast, the 5km Lavena Coastal Walk, which takes in waterfalls, black-sand beaches, mushroom-like coral pedestals, snorkeling spots. 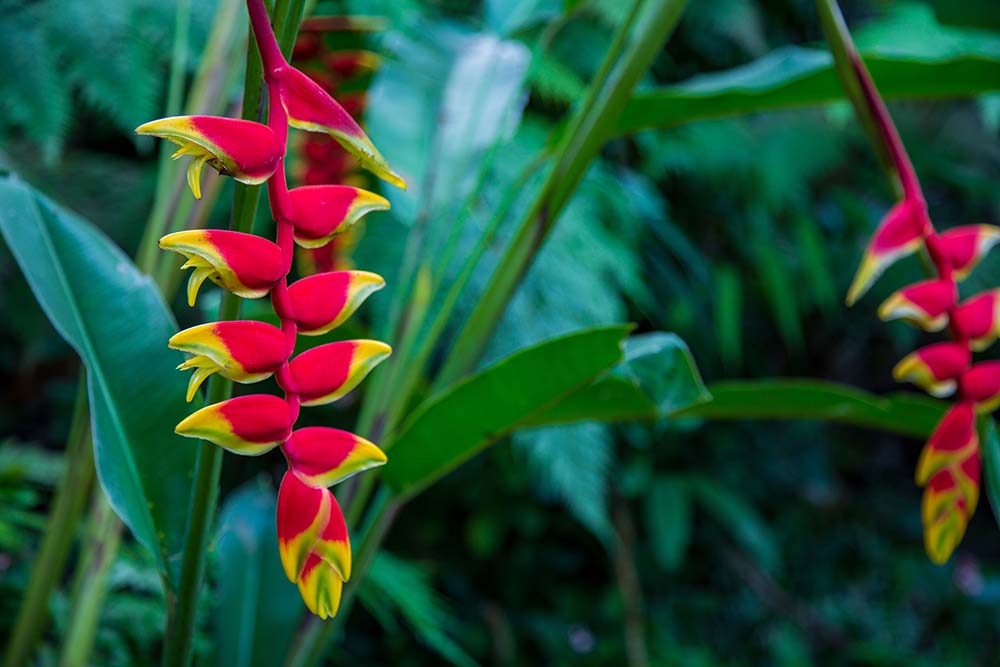 Locals also dream of visiting Tauveni to see Fiji’s elusive national flower, the tagimoucia: a crimson and cream flower that’s inspired pop songs and has been described to “hang down in clusters like a chain of ruby raindrops.”

4. Fall in lovo with the backyard BBQ 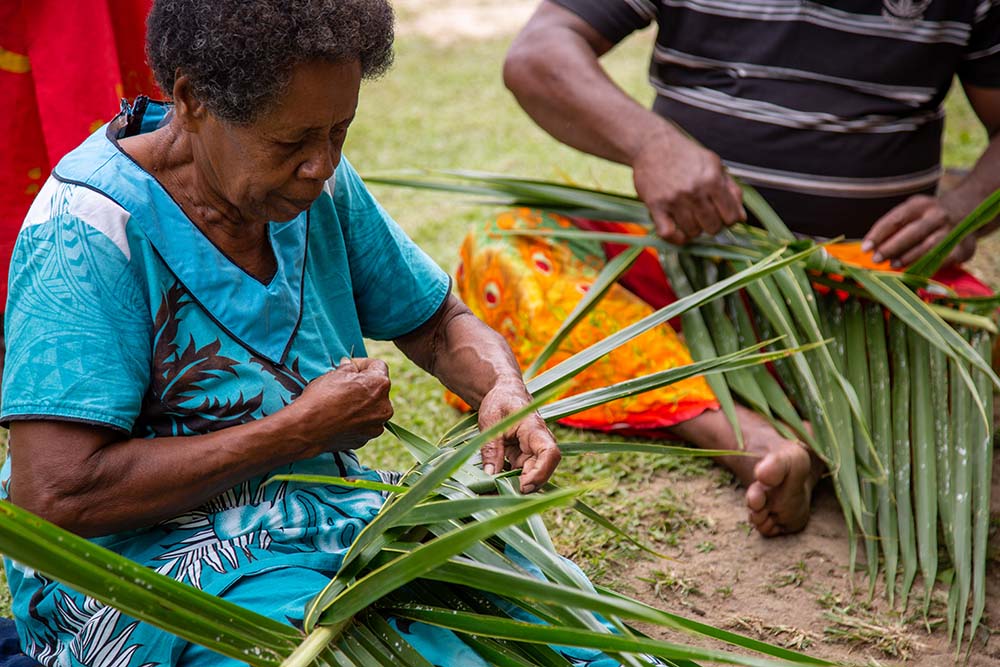 The modern cuisine of Fiji is surprising. Meals are refreshingly fresh and healthy. And, diverse. Local homes are happy to incorporate styles from Indo-Fijians, Fiji citizens who are fully or partially of Indian descent, so you’ll find plenty of curries and roti flatbreads as part of the daily diet. 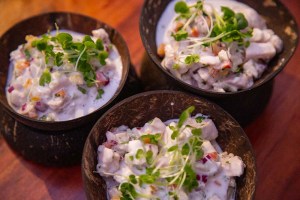 Islands have also concocted their own ceviche, a seafood dish originating in Peru typically made from fresh raw fish cured in citrus juices and spices.The seafood here is legendary – imagine fresh filets of wahoo, marlin or barracuda served in coconut milk, plus giant lobsters and prawns — especially a spicy bowl of kokoda. Sometimes served in an open clamshell, this delicious mix of raw fish is marinated in lime juice and served with coconut cream, onion and chilis.

Another must-try: lovo. A dish, wrapped in foil and banana leaves, then set overheated river stones and left to roast over a pit for a few hours slowly. It’s the South Pacific’s version of an underground BBQ, made with any protein you prefer (fish filets, pork or chicken cutlets, or even rourou taro leaves). Most resorts offer lovo, and it’s still a special banquet-type method used in villages for weddings, birthdays, funerals and other special occasions. 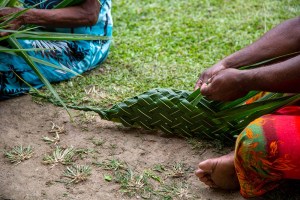 Visiting a Fijian market is a colorful way to see what tropical staples make up a regular part of local farming and local diets. Walkthrough one and see often artfully stacked displays of pineapple, kumula (sweet potato), taro and uto (breadfruit), nama (sea grapes) or powdered kava root sold in small paper bags. You’re sure to find tavioka (or cassava) on your plate, as the starchy root is so common it’s been called “Fiji’s rice.” Meanwhile, coconuts come from the “tree of life” and play a big role as curries, bread, even as cups during kava ceremonies. 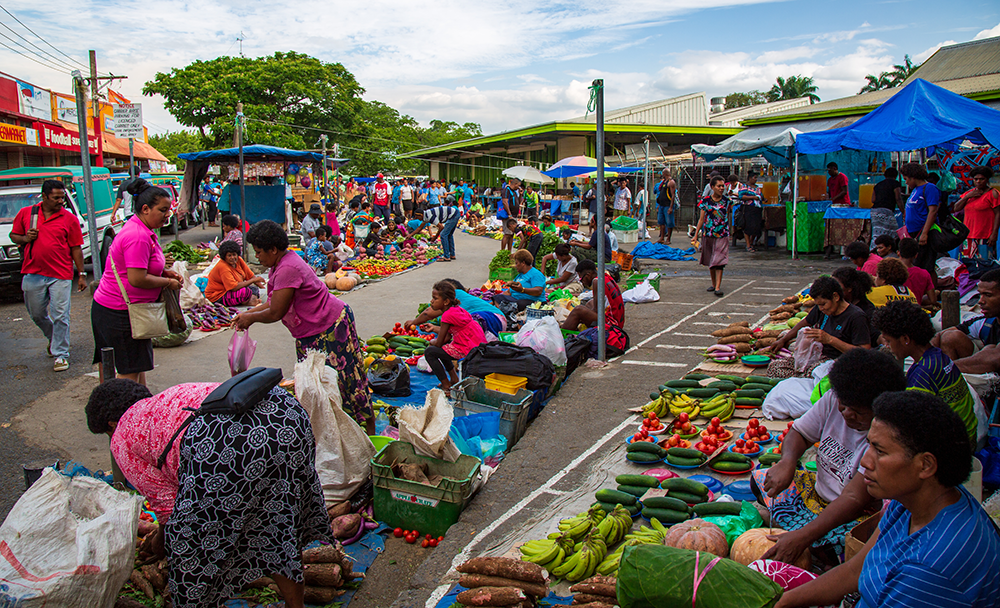 5. Get ready to rugby 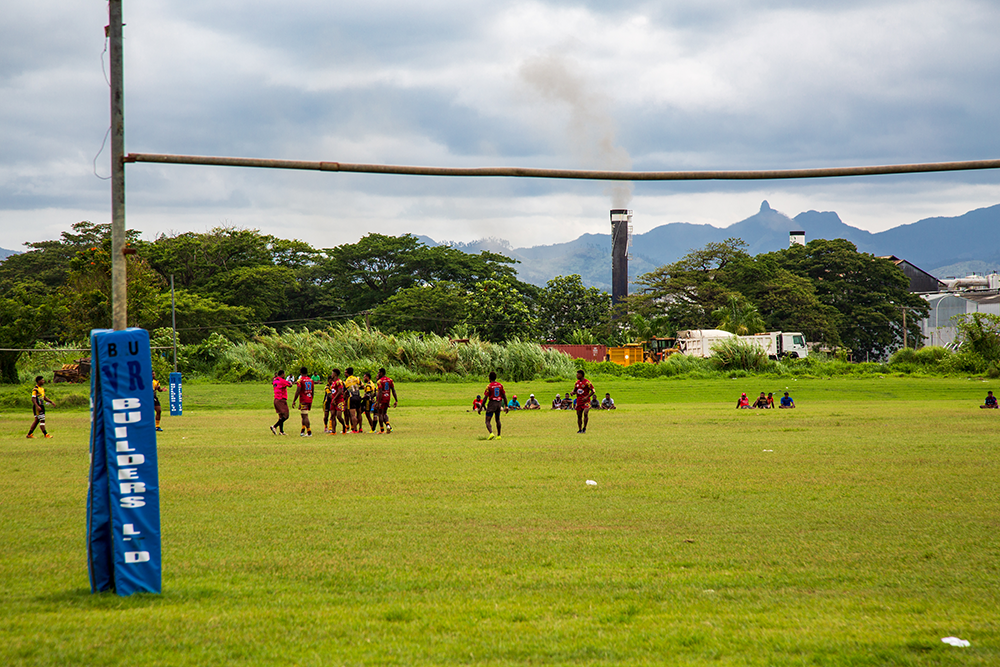 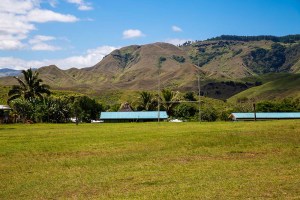 Fiji’s gorgeous color-coded dollar bills are adorned with tropical animals and traditional details like the intricate designs seen on masi bark-cloth wall hangings. But none compare to the glory of Fiji’s $7 bill, which celebrates the nation’s first (and only) Olympic medal after Fiji took gold in 2016 in seven-on-seven rugby.

Rugby has been big here since the English introduced it in the 1880s. Now, it’s said you can only choose a village site once you have found a field to play rugby. Fun fact: the first televisions appeared here only in 1987, so locals could watch rugby. If a ball’s not around, locals are known to play using empty bottles, lemons or wadded-up shirts.

The official season for professional teams is from April to September – and the youth competition during April’s Coca Cola Light Games is also popular – but you’ll find rugby played all year, particularly on Saturdays. In towns like Ba on Vitu Levu, an hour’s drive from Nadi, gets busy on Saturdays, when locals line the field with lawn chairs to watch game after game of teams pouring in from the Nausori Highlands.

6. Pick your path with Fiji Airways

Make your getaway to Fiji even more rewarding with Alaska Global Partner, Fiji Airways! Book before the end of Feb., and pick your path: Use Alaska miles to get up to 50% off award travel, OR earn DOUBLE the Alaska miles! Terms apply.