Winding through snow-capped mountains and lush green fields decorated with an array of colorful wildflowers is Alaska Railroad’s Coastal Classic Train. The four-hour, one-way train trip carries passengers from Anchorage to Seward in the summer months (May 9 to Sept. 13) and offers views of stunning glaciers and ample opportunity for photos and wildlife viewing.

The trip starts right in the middle of downtown Anchorage and wanders all through the city before continuing through the Chugach National Forest. The Chugach National Forest spans nearly 6 million acres, most of which is untouched by road or even trail. It is the second-largest national forest in the United States, surrounding all of Prince William Sound in the south-central region of Alaska. 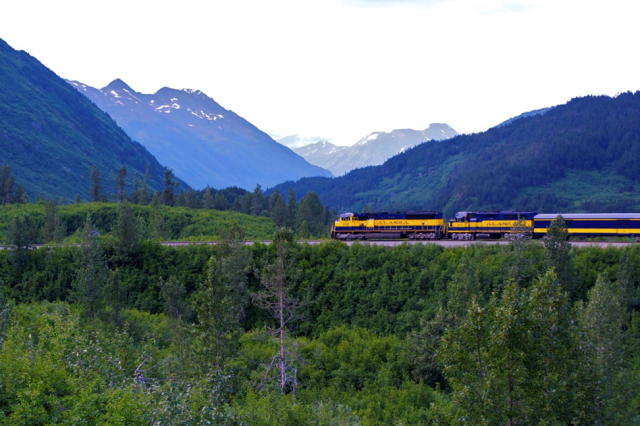 The locomotive line ends in Seward, a town named after William Seward, who was President Abraham Lincoln’s Secretary of State. Seward is credited with the United States’ purchase of Alaska from Russia in 1867. Alaska was purchased for 5 cents per acre for an ultimate price of $7.2 million. At the time, the American public criticized Seward for purchasing what they presumed to be a wasteland, nicknaming it “Seward’s Folly.”

But while wandering through the depths of the Chugach National Forest, it’s apparent that the purchase of the Alaska Territory was anything but a folly. On the 126-mile day trip from Anchorage to Seward, the train passes by four glaciers and an incredible mountain pass that is only accessible by train. Wildlife sightings are also common, with mountain goats climbing the peaks, bears feasting in nearby streams and moose crossing the fields of tall grass. 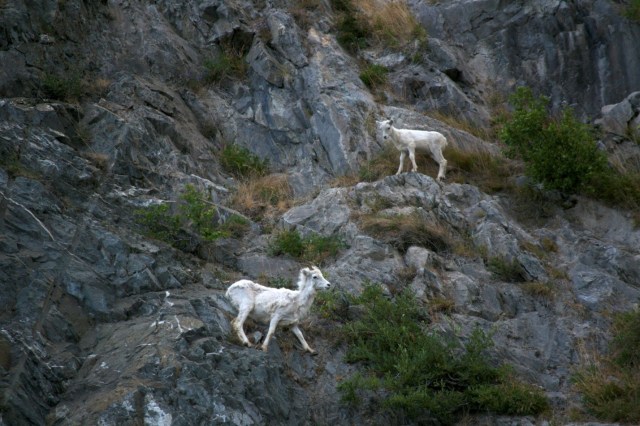 Melting snow from the above mountain peaks flow into waterfalls that pour off the jagged rocks along the railroad tracks. As the train climbs up the mountain pass, there are several switchbacks, which allow for views of the entire train with picturesque mountains in the backdrop.

As much a part of the train experience as the stunning scenery, are the tour guides who provide passengers with commentary and educational information during the trip down to Seward. The Alaska Railroad has a unique partnership with local high schools and all tour guides aboard the Alaska Railroad are Alaskans. Students apply to participate in the program and once selected, they complete a rigorous 11-week course in Alaska geography, government and culture, which fulfills their Alaska history high school course requirements. After they complete their training, students are invited to apply for summer employment at the Alaska Railroad.

“The program allows us to give our young people training and exposure to Alaska’s tourism industry,” says Mike Woods, who has been an instructor for the program since 1993. “It also allows them to take pride in their state and to share what their state has to offer with people.”

Many students who complete the program still work in Alaska’s tourism and travel industries. KC Hostetler, a sales and community marketing manager for Alaska Airlines, was previously a tour guide for the Alaska Railroad.

“For most of the people riding the train, this is the vacation of a lifetime,” Hostetler said. “As a tour guide, I had the opportunity to be a part of their memories. That is very humbling but something I loved about the job.”

With their continued training, the tour guides are experts on all things Alaska and are prepared to answer almost any question.

“This program isn’t just a job training program for Alaska’s youth,” says Woods. “The program also includes adventure training. On their days off, we organize trips so that they can familiarize themselves with all different parts of the tourism industry. They’ll be up on the helicopter tours and return to share that experience with their colleagues.”

“My favorite passengers were those had waited their entire lives to come to Alaska. You could always tell them apart,” says Hostetler. “They constantly asked questions like, ‘How many teeth does the average adult male moose have?’ The answer is 26, in case you were wondering.”

Upon arrival in Seward, guests exit the train and are free to explore Seward for several hours before the train returns to Anchorage.

The city of Seward was once bustling with Russian fur traders, who loaded up their loot onto boats in Resurrection Bay to be shipped throughout the world. While it still remains a vital port to the state of Alaska today, it is also a coastal fishing town and popular tourist destination. Many cruise ships unload their passengers in Seward to take the train to Denali National Park and explore the Interior of Alaska. Locals from Anchorage, too, make the 2-hour drive along the scenic Seward Highway to embark on weekend fishing trips and excursions.

The train for Seward leaves Anchorage at 6:45 a.m. and arrives in Seward at 11 a.m. You’ll get six hours to explore before the train back to Anchorage. If you don’t have time to do the full ride to Seward, the Alaska Railroad also offers a Glacier Discovery Train service, which is a shorter ride along the same route that offers similar views of the Bartlett and Spencer glaciers. If you crave more adventure, whistle stops are available along the route that provide access to trails deep in the Chugach National Forest. The U.S. Forest Service also maintains public use cabins that are available to reserve for backpacking trips. Check the Alaska Railroad website for schedules and tour information.

Get a sweet treat at Sweet Darlings. This old time candy shop features fudge and gelato made on site. 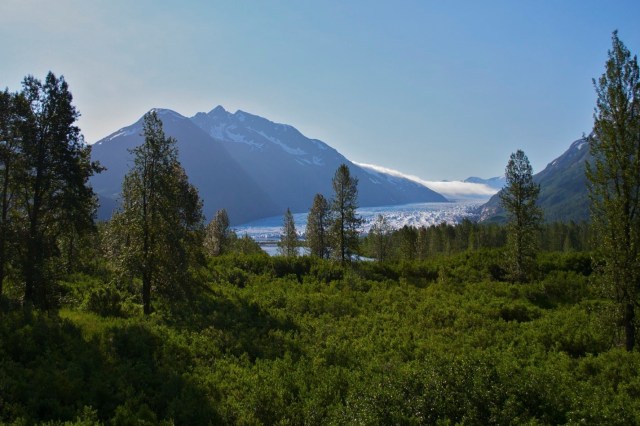