To five-year-olds in Kotzebue, Alaska (and Internet surfers round the world), the question of just whose face adorns the tails of Alaska Airlines 737s is a heated one. It is an oft-asked question about the Seattle-based airline, but the truth is anything but simple.

While the argument of whose grandfather served as inspiration for Alaska’s iconic paint scheme may be lighthearted, its meaning is profound. For residents of Kotzebue, a 3,200-person city some 30 miles north of the Arctic Circle, and the 15 other cities inaccessible by road that Alaska serves throughout the state, air service is vital. In Barrow, North America’s northernmost city, residents joke that before construction on the city’s new hospital was completed in 2013, if you were sick, “you didn’t call the hospital – you called Alaska Airlines.”

Alaska Airlines is embedded into the fiber of the communities it serves in the harsh, breathtaking state of Alaska in a way that can’t be replicated in the 71 destinations it serves in the lower 48. In Alaska, the airline brings the mail, the groceries and the medicine. And because it is so vital, the face on the tail represents more than just a logo. It means safety, family, community, home – and, more often than not, a grandfather, uncle or family friend.

“When I see that face, I feel proud. I feel like I’m home,” says Sallee Baltierra, a concierge in Alaska’s Anchorage Board Room airport lounge. “I love to see that Eskimo on the tail in other cities that we fly to, from Liberia, Costa Rica to Nashville, Tennessee. It makes me feel like there’s a little piece of home there waiting for me.”

Alaska’s iconic Eskimo first appeared in the skies in the early 1970s, but the airline’s history goes back much further. 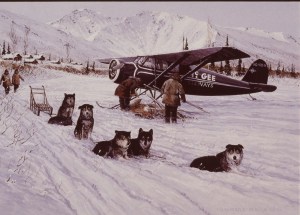 The company was born in 1932 when Linious “Mac” McGee started flying his three-passenger Stinson from Anchorage to Bristol Bay. Two years later, McGee Airways merged with Star Air Service and became the largest airline in the state, with 22 airplanes. After another decade, and several more mergers, the airline found the name that stuck: Alaska Airlines.

The Eskimo first appeared in 1972, when Alaska adopted a four-logo paint scheme – a totem pole, to represent the native culture of Southeast Alaska; a gold miner, to represent the booming gold rush days in Alaska; Russian spires, to represent early Russian heritage in the state of Alaska; and a native Alaskan adorned in a traditional qulittaq (parka with ruff) to represent the Arctic region and its people. Indigenous Alaskans in the Arctic, traditionally of Inupiat or Yupik descent, commonly refer to themselves as Eskimo.

“I am from Northwest Alaska. For many of us from that part of the world, there has been a sense of pride and a feeling that Alaska Airlines is acknowledging our identity with the display of the Eskimo on the tail of their aircraft,” says Helvi Sandvik, a director of the Alaska Air Group board and president of NANA Development Corp., an Alaska Native corporation.

Infographic: Alaska by the decades

These four liveries adorned Alaska’s jets from 1972 until 1976, when the company adopted the Eskimo tail fleet-wide, and updated the face to be less stern.

The adoption of the four-logo scheme was a bold move for an airline in 1972, and a drastically different look for the 50-year old company.

“I remember this distinctly,” recalls Alaska retiree and company archivist Ron Suttell, of the first time he saw the Eskimo. “I was a freight agent in Juneau and I was just getting off shift one night. I went over to a familiar airport watering hole after work and looked over at where the airplanes were parked. It created quite a stir.”

Suttell started at the company in 1971, during a turbulent period for the airline. It struggled with a messy operation (late bags, delayed and canceled flights), a poor reputation and a cash flow problem.

The introduction of the four logos, and with them, the Eskimo, heralded big changes for the airline: new leadership, better financial oversight and a renewed focus on its operation and its customers.

“Putting such a bold visual statement on our airplanes was really pretty astounding at the time, but it didn’t take long to grow on you that what we were doing was really exciting,” said Suttell. “That was really the start of the journey to becoming the airline we are today.”

With the exception of a few color tweaks, the smiling Eskimo from 1976 has remained more or less unchanged for four decades, although discerning eyes will notice that many of the tails don’t quite match. In the early days, airplane liveries were hand-painted, and tales abound of maintenance employees who would give the Eskimos they painted a signature twist to set them apart when spotted.

In January 2016, Alaska unveiled its first major brand update in a quarter century, smoothing and modernizing the Eskimo for the digital age and adding invigorating pops of color around his ruff.

“It’s not meant to be a massive change,” said Sangita Woerner, Alaska’s vice president of marketing. “It’s the same person, the same symbol – but he is bigger, bolder and more impactful.”

But who is it?

More than 40 years after the Eskimo first appeared, Alaska’s reservations agents still take calls on weekend nights from groups of giggling friends who want to know: “Hey, we have a bet going – who IS that guy on the tail?”

Seveck was an Eskimo dancer and reindeer herder in Kotzebue, who used to greet incoming Alaska Airlines flights with his wife. While residents of Kotzebue and many of Alaska’s customers and employees firmly believe that Seveck’s face adorns Alaska’s jets, many others believe it is Amouak, an Inupiat Eskimo who was hired by Alaska in the late 1950s to perform in a traveling stage show called “It’s Alaska!”

(Lukin, from Kotzebue, says she has no doubt that it’s Seveck.)

“Everybody in Alaska knows who’s on the tail – they just can’t agree,” laughs Perry Eaton, an Alutiiq artist based in Anchorage.

The four-logo paint scheme was the brainchild of Alaska’s marketing department and its advertising agency at the time. The icons were designed by the agency’s artists, and the Eskimo and miner were intended to depict generic representations of a traditional Alaskan Eskimo and a Klondike gold miner.

Whether the artists were inspired by real people remains a mystery to this day – both within the company and without – as no official documentation has ever been uncovered indicating that either the Eskimo or the miner was based on a specific person.

Even Alaska’s archivists, a team of retirees and long-time employees passionate about preserving the company’s history, can’t agree. Suttell, a 40-year employee before he retired, always assumed the face was based on Amouak, while fellow archivist and retiree Danna Siverts is convinced Seveck was the inspiration (“Just look at that face! Of course it’s Chester.”)

“What I think it is and who I think it is, is you. I think it’s me. It’s anybody who flies on Alaska Airlines. I think it symbolizes the community and the family and the spirit of the airline … there’s really no one answer.”

To the 15,000 employees of Alaska Airlines and its customers throughout North America, the Eskimo is more than a name or a face painted on the tail of a plane. It’s a reflection of people and their connection to the airline they love.

“This company does have a soul. It has a spirit,” says Alaska CEO Brad Tilden. “To me, the Eskimo is the personification of who we are.”

He stands for community and teamwork, the beauty of knowing there’s a big world out there to explore; the airline’s rich history, and its dynamic future.

85 comments on "The story of the Eskimo: Who is on the tail of Alaska Airlines’ planes?"