Wildfires currently burning in the state of Washington are the largest in the state’s history, and Alaska Airlines has pledged to do what it can to help with relief efforts.

Firefighters are battling 16 large wildfires consuming about 600,000 acres (an area nearly seven times the size of the city of Seattle) across Eastern Washington. The fires have killed three firefighters, destroyed more than 200 homes and threaten more than 12,000 additional structures.

Smoke from the fires has blanketed the state and is affecting operations at several airports including Sea-Tac International Airport and Pullman-Moscow Regional Airport.
Alaska’s sister airline Horizon Air, which operates regional flights throughout Washington has canceled four flights and diverted two due to heavy smoke in the past week. On Sunday, Seattle-Tacoma International Airport issued a temporary ground delay program delaying about 1,000 Alaska Airlines passengers flying to and from Seattle an average of 25 minutes per flight.

As of Monday, the fires were just 10 percent contained, and expected to continue to spread over the coming days.

On Tuesday, Alaska and a number of other Northwest companies that are part of an initiative called Challenge Seattle announced donations to wildfire relief and recovery efforts through the Red Cross. Alaska’s pledge of $25,000 will supplement an earlier $100,000 commitment to the Red Cross’ Ready 365 program made by the airline in June.

“These fires are having a direct effect in our local communities” said Shaunta Hyde, managing director of community relations. “Donating to the American Red Cross is one of the fastest ways we can help quickly touch our friends, neighbors and communities in desperate need.”

How to help: Donate to Red Cross Disaster Relief by visiting redcross.org, calling 1-800-RED CROSS or texting the word REDCROSS to 90999 to make a $10 donation. Alaska employees are encouraged to double their gift by donating through Alaska’s matching gift program.

Alaska employees are stepping up, too. In 2015, they’ve donated more than $5,600 to the American Red Cross through Alaska’s matching gift program. Individual employees, like Wenatchee customer service agent Shanon Baker, spend their free time volunteering with the Red Cross and other relief organizations. This summer, Baker has been active in setting up shelters and distributing food in East Wenatchee, Entiat and Chelan.

“I feel a sense of pride when I volunteer,” says Baker. “It touches a place in my heart knowing that I can do something for those that have been impacted by not only the wildfires, but by any type of disaster. It’s a great feeling to know that you’re doing something to help.”

Wenatchee customer service manager Jason Wyles says flight attendants on flights to and from Wenatchee as well as airport employees have also been making special announcements thanking firefighters as they fly in and out of the area.

“The fires are absolutely devastating and our thoughts and prayers are with the families of the fire victims,” Wyles says. 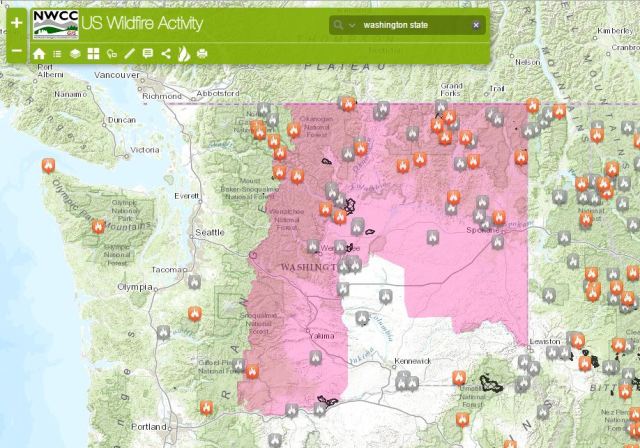