On a rainy Tuesday in the middle of the professional football season, Russell Wilson walks onto the cancer floor at Seattle Children’s Hospital. He’s running late because of traffic and already wishing he could stay longer. But when he steps into a young patient’s room and the dimmed lights come up, all of his attention now belongs to this family—and he has an abundance of high-fives, handshakes and hugs to share.

The winningest quarterback in Seattle’s history has met hundreds of children since he started visiting the hospital in 2012, but each room offers its own moment to connect with that one child, that one family.

On today’s visit, Wilson extends a hand to every­one in the room. He has a signed football and a poster for them, but the bigger gift is his presence, as seen in the shy smiles that light up their faces. This is the first time the father has seen his teenage son smile in the week since his diagnosis.

Wilson sits on the bed, leans in close for a photo and promises prayers. He asks the boy who plays football, too: “Are you going to play for us?” When the teen looks down, Wilson’s response is quick: “Why not you?”

This question—this challenge—is at the heart of everything Wilson does, on the football field, throughout his business ventures and in his many interactions with his community. Why not win the biggest trophy in football, even though Wilson was told over and over again that he was too short to play professionally? Why not produce inspirational film and TV programs with his wife, singer/songwriter Ciara? Why not team up with his adopted hometown’s airline, Alaska Airlines, to push high school seniors to chase their dreams—and even splash the message on the side of a plane?

“Why make your dream too small?” Wilson asks after his hospital visit. “If you’re going to dream, you might as well dream really big. You may not get there, but at least you got somewhere close.”

Wilson has been dreaming big since he was a kid writing down his goals in Richmond, Virginia. Those dreams fueled Wilson to win the starting-­quarterback job for Seattle as a rookie in 2012—and to lead the team to its first title the next season. And back in high school, Wilson was already dreaming about inspiring other kids. “I had a vision with Scott Pickett [now one of his business partners] in 10th or 11th grade,” Wilson says. “We started talking about this idea that when I make it, I’m going to have camps, travel around the country—around the world—and teach kids how to play the game of football. But more than football, I’m going to teach them about life.”

So far, more than 10,000 boys and girls, from Shanghai to Chicago to Seattle, have participated in those Russell Wilson Passing Academy camps, co-sponsored by Alaska Airlines. About half of the kids, ages 8–17, attend on scholarship each summer.

“I say at the beginning of camp that if we inspire one kid today, the mission’s accomplished,” Wilson says. “Maybe that one kid can inspire the world.”

On a given Tuesday, that one kid might be at Seattle Children’s Hospital, where the walls are decorated, and staff—and many patients and visitors—are outfitted in No. 3 gear. One door sports a sign that reads: “Russell Wilson, stop here! (please).” When Jackson, the boy in the room, sees Wilson peek around the curtain, Jackson’s dad has to remind his son to breathe.

“Our caregivers do such an amazing job—but we don’t really want the kids to remember all of the pokes and prods,” says Allison Broadgate, director of Strong Against Cancer at Seattle Children’s. “Isn’t it wonderful if they remember a visit from Russell Wilson instead?

“He’ll see kids who could be having a good day, and kids who might be going through the hardest day,” she says. “Either way, the impact is huge. He always brings hope and a reminder to everyone that believing in your dreams is the biggest thing.”

Wilson is still dreaming big. His Why Not You Foundation has raised more than $8 million so far for pediatric research through Strong Against Cancer, in partnership with Alaska Airlines and Safeway. His Why Not You Productions has programming in the works—“awesome projects coming up in 2020 that we’re really fired up about,” Wilson says. And this October, he and Ciara announced that West2East Empire, their brand-management company, will start representing other athletes and entertainers in their careers.

Every venture Wilson and Ciara take on together, business or philanthropic is intended to be a world-changer. “That’s a core essence of our decision-making,” Wilson says. “Is it going to inspire someone? If it doesn’t, then it’s probably not for us.”

You and Ciara announced this fall that West2East Empire will start representing other athletes and entertainers. What inspired you to start this new venture? Through music and sports, we’re blessed to be able to encourage people and inspire people. And we love talent. We want to make people’s dreams come true. We’ve been encouraging one another, and now to help encourage somebody else is going to be great. And [partner] Jason Weinberg is one of the best managers in the world. He helps us with TV and film, as well, so we’re excited about where we’re headed with this.

What do you hope to pass along to other rising stars? I was a kid from Richmond, where people told me I wouldn’t ever make it. I really believe that you’ve got to control your future. You have to have a vision of where you want to go. That was really critical for me.

Do you and Ciara enjoy working together? Yeah, we really do. We get to share the same office here in downtown Seattle, and we get to spend a lot of time together and travel the world together. She’s my No. 1 fan. I’m her No. 1 fan, that’s for sure.

Who are some of the people who helped your dreams come to life? My agent and lawyer, Mark Rodgers. When I met him in May 2010, my dad was on his deathbed. Mark became my baseball agent. He also became a father figure very quickly in my life. I would also say my brother and Trevor Moawad, my mental-conditioning coach.

Even though my dad’s no longer living, he’s with me, and the things he’s taught me are with me every day. My mom showed me what faith looks like. When my dad was sick and didn’t have many hours left to live, she showed me the power of prayer. I have really been fortunate to surround myself with great people who believe in my dream.

Why is it so important to make time for Seattle Children’s Hospital each week during the season? When much is given, much is required. God has blessed me with a lot. He’s blessed me with talent. He’s blessed me with an opportunity to inspire people. I used to go to the hospital all the time because my dad was always there. I know what losing your dad is like and what losing a loved one is like, and I couldn’t imagine what potentially losing a child is like. The reality is that cancer is real; disease is real—things we all have to face. We can’t do it alone. Whatever way that I can help support families and loved ones and young children in terms of just giving them a glimpse of hope is what I think God has put me on this earth for. 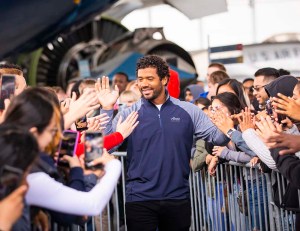 You and Alaska Airlines have teamed up for the past three years on the NoTime2Sleep event, giving scholarships to graduates in the Seattle area’s Highline Public Schools district and urging them to pursue their dreams. Why do you choose to partner with Alaska?When I was a high school graduate trying to go to college and trying to be successful in sports and in my education, I had a dream, too. Now, to be able to share my dreams and where I was at that point in my life and to hopefully inspire them—it’s totally worthwhile. The companies we work with, like Alaska Airlines, they also want to inspire the world. They want to be able to impact people. Investing in community—that’s investing resources, time, energy, investing your heart and soul and love. It’s everything. We can do that together. And then how far can we all go? 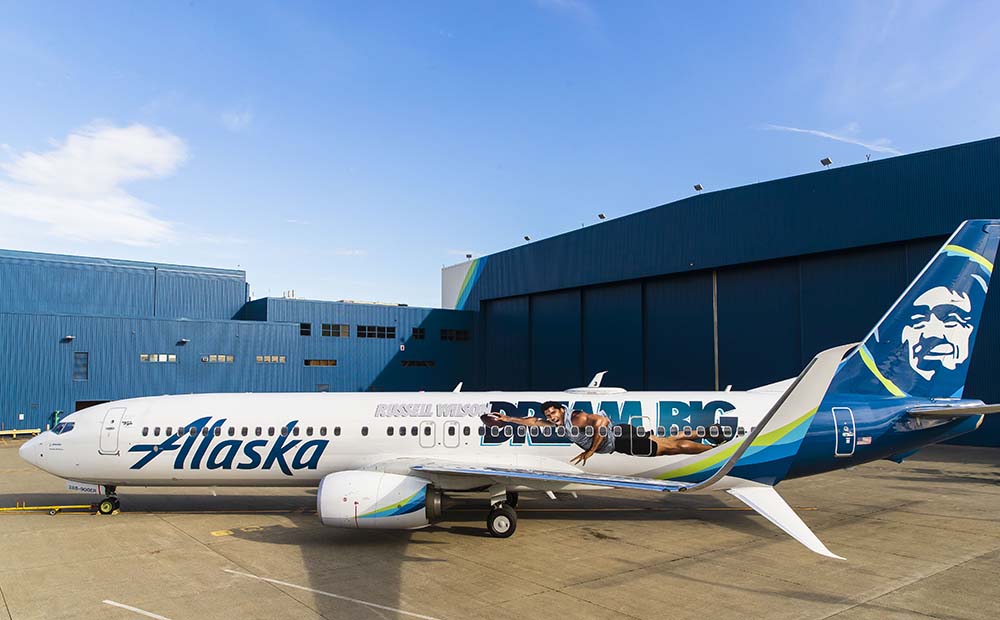 Highlights from the Alaska Airlines–Russell Wilson partnership include: