The theme is “Alaska Airlines Company Retreat,” a camp where employees are pushed to greatness by Wilson, who plays a role that’s part counselor, part drill sergeant, part guru.

“These are some pretty creative commercials,” Wilson said during a break from a scene that had him holding a chainsaw and a carved wooden hawk statue (which will make a lot more sense after you watch the ads). 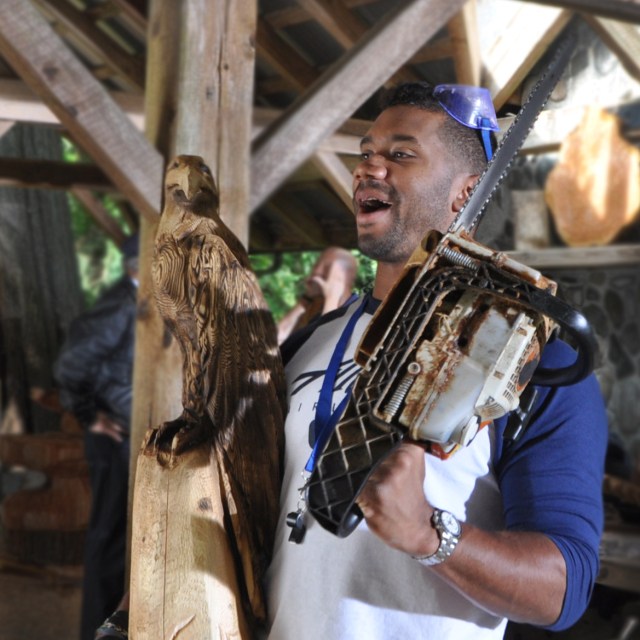 The three commercials feature real Alaska and Horizon employees from around the country. They were filmed during a 16-hour day in July at Camp River Ranch, a Girl Scouts camp in the Cascade foothills near Carnation, Washington.

This is the second year of Alaska commercials for Wilson, who recently renewed his contract as the airline’s CFO – “Chief Football Officer.”

“This young man is one of the most amazing human beings I’ve ever met,” said Alaska Airlines Captain Mike Swanigan, who reprised his role after becoming a star in last year’s ads. “He’s got the entire package: the athletic ability, the personality, the character – it’s just not fair that one guy gets all that!”

Fueled by coffee and Red Bull, the first group of employees arrived on set at 5:30 a.m., unsure exactly what they were getting into.

“I think it’s so cool that Alaska would open this up to employees to be in a commercial – what other company does that?!” said Nancy Hardman, a Horizon CSA in Reno.

In the first scene on Lake Langlois, 15 employees climbed into a canoe and director Justin Reardon gave them instructions.

“This is about being as authentic as possible,” Reardon said. “The more serious you are, the funnier it will be. This is like a legit retreat for employees, and Russell is the leader of our emotional bonding.”

An actor served as a stand-in for Wilson while videographers adjusted the lighting and their gear. Wilson arrived when it was time to shoot his scenes. In full uniform and life vests, the team of pilots, flight attendants, CSAs, rampers and office workers broke a sweat as they paddled the canoe around the lake, again and again.

“This is how we used to get to Hawaii,” flight attendant Bobby “Nappy” Napoleon joked.

‘Putting in the work’ 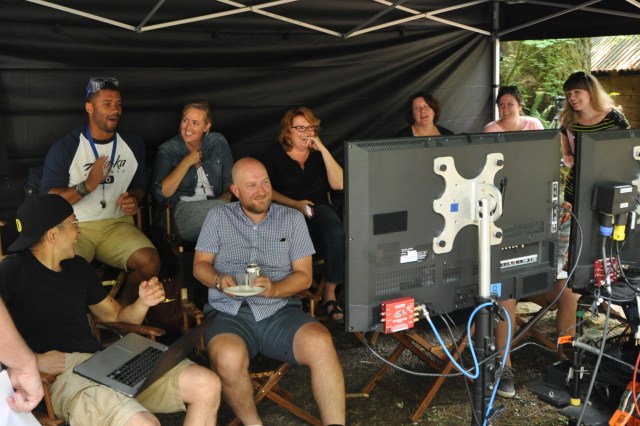 The thing about commercials is that it takes a lot of shots to get everything just right. So the employees-turned-actors did scenes over and over, sometimes trying out different punchlines.

“Shooting a Russell Wilson commercial is not easy,” Nappy said. “You are definitely putting in the work for sure.”

During breaks between shots, Wilson joked around with employees, watched his takes on the video screen, and even led a few rounds of karaoke in a canoe.

Other scenes involved a drum circle and a woodworking class – and once again, Captain Swanigan plays Wilson’s foil.

For the last shot of the day just after 8:30 p.m., flight attendant Christa Treat stood atop a tall stump and prepared to do a “trust fall” backward into the arms of 10 co-workers.

“Am I smiling? Or what am I doing?” Treat asked the director.

“You just need to be natural,” Reardon said. “At first, it’s trust. Then when you land, it’s an explosion of happiness.”

Treat folded her arms across her chest, straightened her legs and toppled like a cut tree.

Her trustworthy co-workers caught her. Everyone cheered – it really was an explosion of happiness.

Best of all, nobody was acting.