Starting today, guests will start enjoying flights on our Pixar-themed Boeing 737-800 aircraft. Its playful design includes some familiar faces and magical places from the Toy Story animated film series spanning both sides of the plane.

They’re all heading to Pixar Pier, a reimagined land at Disney California Adventure Park at the Disneyland Resort.

Can you spot the pieces of Pixar?

Buzz Lightyear: The evil Emperor Zurg is no match for this Space Ranger of Star Command who’s in between the tail and his friends. To infinity and beyond!

Jessie: The yodeling cowgirl can be spotted wrangling in her pals at the tip of the tail.

Rex: Look closely! You’ll spy the green head of Tyrannosaurus Rex peeking in the window near our plane’s front door. He’s there to say hell-roar to our guests!

Aliens: It’s a bird, it’s a claw … no, it’s an alien strapped to a rocket on our winglet! These identical toys, prizes from an arcade game at the fictional Pizza Planet restaurant, are painted on both winglets.

Luxo ball: It’s the ball that has enjoyed a roll in a number of Pixar movies, most notably ‘Toy Story,’ and the ‘Luxo, Jr.’ short. It sits at the tip of our plane’s nose.

Pixar Pier: It’s a sign. Pixar Pier is the latest reimagined land to explore at Disney California Adventure Park. There you’ll see beloved Pixar characters come to life from the Incredibles Park, Inside Out Headquarters to the Pixar Promenade and Toy Story Boardwalk. 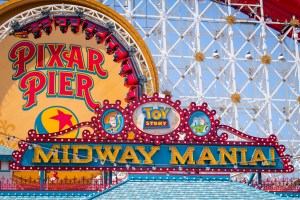 This is our sixth paint scheme celebrating Disneyland Resorts. It’s called “Friendship and Beyond at Disneyland Resort.” The inaugural flight flew from Seattle, with a stop in San Francisco for a gate ceremony and then onto its final destination in Orange County (my guess, next stop: Pixar Pier).

“There’s nothing better than landing happy on the way to The Happiest Place on Earth,” said Natalie Bowman, Alaska Airlines’ managing director of brand marketing and advertising. “The Disneyland Resort is one of our signature West Coast friendships, and we love that we can celebrate Pixar Pier by taking these iconic characters on a brand-new adventure.”

The magic behind the paint:

The exterior of the plane required more than 2,800 work hours over 24 days using more than 50 gallons of paint — in 44 primary colors and custom shades — to completely repaint the aircraft with the vibrant new livery.

You can always book a trip to Southern California to visit Disneyland Resort (or hundreds of other destinations) at alaskaair.com.

Reach for the sky!