After a weeklong fishing trip in Yakutat, Alaska, retired Captain David Olson found himself on one of the last flights of the 737-400 combis – a plane he piloted for two years straight when he first started flying for Alaska Airlines nearly 36 years ago.

“It’s truly nostalgic,” he said aboard Flight 66. “They’ve been around a long time and brought me some great memories, especially fishing holes.”

Cargo in the front, passengers in the back 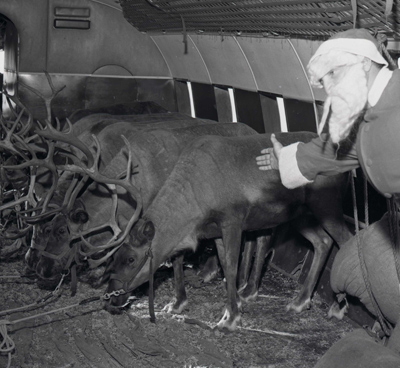 A combi is the mullet of airplanes — it’s half cargo in the front and 72 passengers in the back. For decades, it’s served as a lifeline for communities in Alaska that aren’t well connected to the outside world.

Eventually, our five combis will be replaced by a fleet of three dedicated 737-700 freighters, one of which is already in service.

Each combi flight holds four cargo containers called “igloos” — weighing anywhere from 12,000 to 14,000 pounds. The combi can carry just about anything, including boxes of groceries, bouquets of flowers, brand-new cars or even reindeer.

The combi is also used as a way for people get from point A to point B in the nation’s largest state.

“Here, you can’t just hop in a car and drive to where you need to go like you can in the Lower 48,” Coleman said. “If you want to get somewhere, you have to hop on a boat or a plane.”

Getting goods from one city to another in Alaska can be challenging due to its sheer size and rugged terrain.

Recently, Sen. Lisa Murkowski of Alaska spoke on the U.S. Senate floor about the important role the combi has played for those who live in her home state.

“It’s really the end of an era,” she said. “They were specifically designed for the special challenges of a very large state, and over their lifespan they have delivered every imaginable thing via airplane in Alaska.” 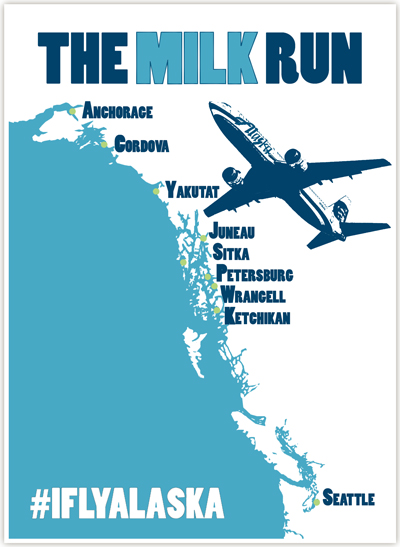 On a special route coined “The Milk Run” (it’s literally how people get their milk), Flight 66 flew from Anchorage to Cordova to Yakutat to Juneau earlier this month.

Olson’s coolers of freshly caught silver salmon were stored in the front of the plane, and arrived to Seattle in time for them to still have that straight-off-the-boat taste, like they have every time, he said.

“The best part about these combis is they get sensitive cargo like fish to where it needs to go in plenty of time,” he said. “It’s how a lot of communities in Alaska thrive and how the Lower 48 gets most of its seafood.”

The Milk Run is a daily circuit of Alaska Airlines flights that leave Anchorage and stop about every 45 minutes to deliver goods to towns in Southeast Alaska. From those locations, smaller airplanes usually deliver the cargo and passengers to dozens of nearby villages.

Alaska Airlines is the only major airline in the U.S. to have combi planes, so any flight crews that have had the opportunity to work on this plane are now a part of aviation history.

Out with the old, in with the new

After a decade of demanding treks, the five 737-400 combis will be replaced by three dedicated 737-700 freighters. One freighter is already actively in service up in Anchorage and two additional cargo planes are still undergoing the conversion process.

All the new freighters are expected to be in service by the end of the year. The combis will likely live out their remaining years as converted freighters with outside parties.

“It’s bittersweet to see their run come to an end, but they were due to retire,” said Jason Berry, Alaska Air Cargo managing director. “As we modernize our fleet we have to make those tough decisions and knew it was time to find new solutions.”

The new 737-700 freighters are the first ever to be converted from passenger jet to cargo plane. They will have 20 percent more cargo capacity, and passengers will now fly separately in new Boeing 737s.

“Although we are sad to see them go we are excited to bring these new freighters to the state of Alaska,” Berry said. “We will be able to continue to serve all of the communities we have served previously and we will be able to offer more lift, more capacity and run on a schedule that is ideal for our cargo customers.”

The evolution of the combi

Before Boeing combis joined our fleet in 1966, Alaska had a long history of carrying a mix of people and cargo – from cows to cars, and anything else they could fit through the doors of our aircraft.

In 1981, Alaska Airlines acquired the first of what would eventually become a fleet of nine Boeing 737-200QC combis – the QC stands for “quick change” because it featured a movable partition, which allowed it to add or remove seats based on how much cargo and how many passengers were onboard.

Pilots said they were especially fond of the -200 combi for its sports car-like handling, powerful engines and ability to get in and out of airports with short runways.

In the all-freight configuration, the 737-200 combis carried up to six cargo containers. The palletized floor allowed for passenger seating to range from 26 with five cargo pallets to 111 in the all-passenger configuration.

Eventually high fuel prices, and increasing maintenance costs and its declining reliability led to its phase-out between 2005 and 2007. The last retired 737-200QC is now at the Alaska Aviation Museum in Anchorage.

Alaska replaced its fleet of nine -200 combis with five 737-400 combis and one -400 freighter. After a lengthy retrofitting and certification process, the first -400 combi began service in 2007.

Even as the aircraft have changed over the years, Alaska remains dedicated to carrying people and cargo throughout the state of Alaska and beyond.

6 comments on "The end of an era: Alaska retires unique cargo-passenger ‘combi’ planes"