For the past six months, Seattle couture designer Luly Yang has been traveling undercover on Alaska Airlines flights, interviewing pilots, flight attendants and customer service agents about their uniforms.

“I tell them I’m on a research project,” says Yang, who was tapped in February 2016 to redesign uniforms for Alaska’s 12,000 uniformed employees. The uniform project is the next visual step in Alaska’s biggest brand update in 25 years.

Yang’s garments are known for their timeless designs and signature fit, cultivated over years of work as an architectural graphic designer, which influenced her design principle of finding the perfect balance between “design and engineering. In the past, Yang also spent years as a fitness instructor, which gave her an appreciation for physiology, ergonomics and an understanding of how the human body lives and moves in clothing. Over the next two years, Yang will apply that expertise to Alaska and Horizon Air’s entire uniformed workforce, paying special attention to fabric, breathability and joint movement in addition to style.

“As a designer, it’s always about collaboration. It’s about being a good listener. That’s the start of all process,” she says.

That philosophy impressed Alaska’s leaders, who researched dozens of designers to find the perfect fit.

“When we met [Luly] at her studio for the very first time, we felt that instant chemistry because she really understood us,” says Sangita Woerner, Alaska’s vice president of marketing. “It’s a rare trait. She’s able to take feedback from 20 different people and take those 20 things and say these are the two or three things that are actually going to make a difference and start to create really fantastic-looking uniforms.”

On one recent trip, a flight attendant took Yang’s questions a step further and collected written feedback from the entire crew. Yang still has that page of notes, and refers to it often.

“The more you’re at this company, the more time you spend with our employees you recognize their fierce love and pride for our company,” says Ben Minicucci, Alaska’s chief operating officer. “And they say ‘We just want to feel good and look good, and we will take this company to amazing places.’” 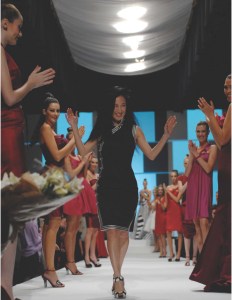 Yang opened her first shop, a studio boutique in downtown Seattle, in 2000 with 12 couture bridal gowns. Today she is an internationally known designer, still headquartered in Seattle. Her portfolio has expanded over the past 15 years to include couture bridal and evening gowns and cocktail attire, menswear, accessories, ready-to-wear, costumes for Seattle’s Teatro ZinZanni and uniforms for Seattle’s Pan Pacific Hotel.

Though a frequent traveler, who has lived in Asia, Europe and the United States, Yang draws inspiration from what she considers to be her “ultimate home,” Seattle.

“The more I travel, the more I love coming home,” says Yang. “Seattle is a combination of all the beauty I’ve seen in my travels. We have the beauty of nature and the beauty of architecture, and being surrounded by all this is a dream come true.”

It’s also an inspiration. Yang designs her ready-to-wear collections from a secret downtown Seattle studio overlooking Elliott Bay, with a backdrop of the Olympic Mountains.

This month her studio is filled with inspiration boards with photographs of the Northern Lights, flight crew uniforms from all eras and swatches of fabric. Dress forms clad in Korean War-era bomber jackets and captains’ hats peek out from corners while racks filled with Alaska’s current wardrobe – everything from suits for pilots to the bright orange safety vests worn by ramp workers – wait nearby.

“Designing a uniform program is one of the most challenging and rewarding projects that a designer can work on,” says Yang. “It is an extended, complex equation with many variables. We just have to find the right formula.”

Yang and her team and a project team from Alaska will spend the next few months conducting focus groups with employees from all of Alaska’s uniformed work groups: pilots, flight attendants, airport staff (including customer service, ground service, ramp and lounge employees) aircraft technicians and stores agents (responsible for airplane parts), to better understand the specialized needs of airline employees.

Yang’s team is planning to have an initial design direction by summer 2016. From there, it’s sourcing materials, manufacturing and distributing the uniforms to 12,000 employees. The entire process is expected to take 2-3 years, with the new uniform line debuting in 2018.

“I knew I loved Alaska before, but I didn’t know it from the inside out. Now I can see why the airline is such a success – it’s all about people,” says Yang. “The real magic happens when the employees put the uniform on and they’re living in it. For me, that’s my magic moment.”