Not since 1918 has a total eclipse of the sun crossed the continental United States. But on August 21, 2017 history will again be made when a total solar eclipse is set to travel coast-to-coast for the first time in nearly 100 years.

An estimated 12 million people live in the path of totality, with millions more expected to travel to these areas for the event, which will last for a matter of minutes. But as with any natural phenomenon, a perfect view is not always a guarantee.

A total solar eclipse occurs when the moon passes between the sun and the earth, casting a shadow, or umbra, that fits perfectly over the sun’s light. Totality is achieved when the umbra covers the sun completely, casting a dark shadow on the earth.

It’s this view that eclipse-chasers, also known as umbraphiles, get excited about.

“As an astronomer, I knew in principle what to expect, but it doesn’t fully prepare you for the awe of seeing it in person,” said Dr. Tanya Harrison, director of research at the NewSpace Initiative at Arizona State University. “The sky turning black in the middle of the day, the birds quieting in confusion – it’s pretty surreal.”

Astronomers and umbraphiles like Harrison don’t just stumble upon eclipses, they carefully plan every detail and hope for the best with regards to weather. Or they get lucky and win a seat on Alaska Airlines’ solar eclipse flight.

Know where to go

A partial eclipse will be viewable from most the country, weather pending, but the best seats are those within the approximate 70-mile wide path of totality. From here, the total solar eclipse will be visible to the human eye as the eclipse makes its way across the country.

For eclipse-chasers in the United States, their commute to see the “Great American Eclipse” will be one of their shortest ever. Many have traveled to all corners of the world to view eclipses, and these hardcore fans begin planning months, sometimes years, in advance – all for about two to three minutes of totality.

For those outside the path of totality, a partial solar eclipse will be visible throughout North America.

One of the best viewing locations will be aboard the Alaska Airlines eclipse-chasing flight. Alaska Airlines’ eclipse-chaser pilots, along with astronomers, have done the necessary preparation to take invited umbraphiles to the path of totality over the Pacific Ocean.

Today, Alaska Airlines launched its “Total Eclipse of the Charter” contest to send one lucky winner and a guest on the trip of a lifetime aboard this special flight on August 21. Contestants are asked to submit a video on AlaskaSolarEclipse.com describing their love of astronomy and excitement to join the special eclipse flight.

“We’re on a search for the most enthusiastic umbraphile to join us for this once in a lifetime flight,” said Natalie Bowman, Alaska’s managing director of brand and marketing communications. “Guests will be treated to an eclipse party like no other, all from a cruising altitude of 35,000 feet above the earth and before most anyone else.”

The contest closes August 7 and the winner will be announced on Alaska’s Facebook and Twitter handles the week of August 14. For contest details, visit https://alaskasolareclipse.com.

The Great American Eclipse flight will depart Portland around 7:45 a.m. Pacific time and fly west over the Pacific Ocean for optimal viewing.

Alaska’s special flight should soar above the clouds for the best view of the eclipse. For those watching from the ground, weather conditions can make or break a view of the event. Even if you’ve secured the perfect spot in the heart of the totality zone, cloud-cover and inclement weather could spoil the view.

Lucky for those chasing the “Great American Eclipse,” the National Oceanic and Atmospheric Administration has compiled historical cloud data for each weather station along the eclipse’s coast-to-coast route. To help with planning, NOAA has crunched all the numbers and created an interactive map that provides the “viewability percentage” for each location. These calculations are based on historical average conditions and are not a guarantee, but can help when planning your trip to the totality zone.

According to NOAA, Casper, Wyoming stands the best chance of a cloud-free view of totality, with only a 12 percent chance of weather affecting the view. Alliance, Nebraska and Idaho Falls are the next places on the list with a good chance of weather-free viewing.

Newport, Oregon is the first stop along the eclipse’s coast-to-coast route, but like most of the Pacific Northwest, the area is more prone to cloudy and foggy conditions.

Chasing the eclipse requires the appropriate gear. Viewing partial stages of the eclipse can cause damage to the eyes, so it’s important to use proper eye protection. Standard shades won’t do, and special eclipse glasses are available from EclipseGlasses.com or GreatAmericanEclipse.com.

“The only safe time to remove your solar viewing glasses is during totality, when the Moon has completely blocked the disk of the sun,” Harrison said.

Many communities along the path of totality are hosting celebrations and festivals to celebrate the eclipse. Harrison also recommends connecting with local science museums and astronomy clubs.

“This can be a great place to interact with both amateur and professional astronomers to learn more about eclipses,” Harrison said. “And sometimes you get the chance to do things like look at the sun through a specialized telescope.”

Attending a “Great American Eclipse” event? Arrive in style with your own “throwing shade” t-shirt. Or, if you’re hosting a party of your own, be sure to stock up on eclipse-themed wines from Fey Vineyards. Maybe an Umbra Chardonnay or Zinfandel is in your tastes, or for the fancier umbraphiles, Totality Sparkling White. 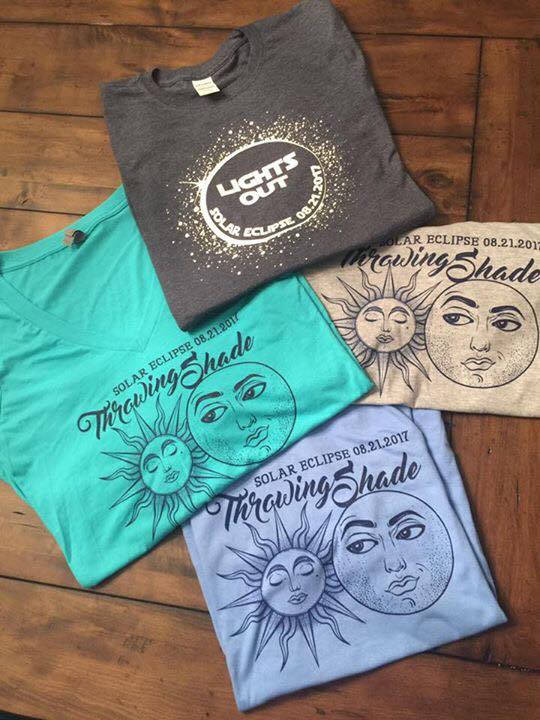 4 comments on "Calling all eclipse chasers: Enter to win and prepare for the “Great American Eclipse”"