Finding out your child is in the hospital is terrifying, especially if you get the news while you’re in the air, aboard a flight headed in the opposite direction.

Jason Carlton, a resident of De Queen, Arkansas, was flying on Feb. 20 with two friends from Dallas to a ministry conference in Seattle.

Prior to the trip, Carlton’s 8-year-old daughter, Mia Beth, had been sick with a cold. Mia Beth has severe asthma and has struggled with respiratory distress. Carleton’s wife, Melanie, had scheduled a doctor’s appointment for Mia Beth that morning.

“Since I had an early flight on Monday morning, I had left home on Sunday afternoon to spend Sunday night with friends in Dallas,” said Carlton. “During the night, Mia Beth’s cold went from bad to worse. We were concerned, but it had been two years since her last hospitalization. I decided to go ahead and make my trip to Seattle.”

At the doctor’s office, Mia Beth’s percentage of oxygen saturation had dropped below normal, and her doctor decided to transfer her to the local hospital via ambulance, and then on to Arkansas Children’s Hospital in Little Rock, about 120 miles away. 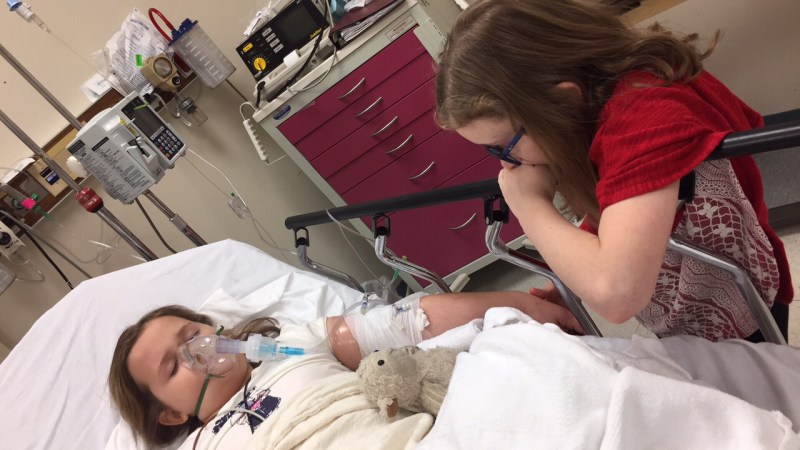 “I was somewhere over Colorado when I saw a photo of Mia Beth in the emergency room back home,” Carlton said. “I told my friend Doug, who was sitting in the row behind me, what was going on, and then sank back into my seat between two total strangers.”

Though Carlton said he knew everything would be fine, he also said that Seattle is a long way from Little Rock when your daughter is in the hospital.

Capt. Eric Werner immediately contacted Alaska Dispatch to book Carlton on the first flight back to Dallas. He also worked with Dispatch to make sure Carlton was able to fly American Airlines from Dallas to Little Rock at no additional cost, since American is one of Alaska’s airline partners.

Flight attendant Heather Weller went to Carlton’s seat to hand him the message from ACARS – a short transmission between aircraft and ground stations via radio or satellite – letting him know that everything had been arranged. 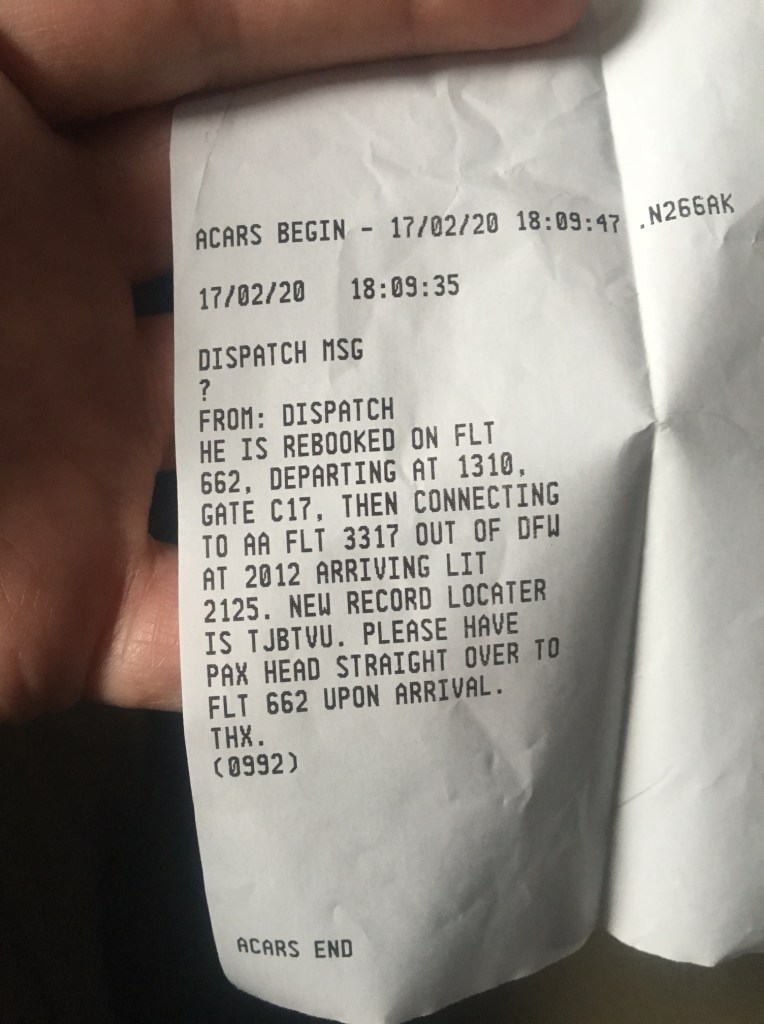 “When I explained the details to Jason, he and his friends shed some tears as they thanked us over and over,” said Weller.

About 30 minutes prior to landing, Carlton, a minister, received some additional comfort from Caldwell, whose dad was a minister before he died last year.

“I knew his heart was still heavy and I wanted to console him somehow. My son was once in the hospital for upper respiratory issues, so I know how hurt Jason must have been and especially being so far from his daughter,” Caldwell said. “I immediately grabbed my dad’s visitation book that I carry with me at all times for my own comfort.”

A minister or pastor uses a visitation book when visiting people who are sick, dying, hurting, etc. It contains words of comfort for situations such as this one.

“I handed him the book with a marked passage about consoling a parent with a sick child,” said Caldwell. “I never give that book to anyone, let alone passengers. It is very special. This was a different case though. I let Jason know that I hoped it could give him some light in this seemingly dark time.” 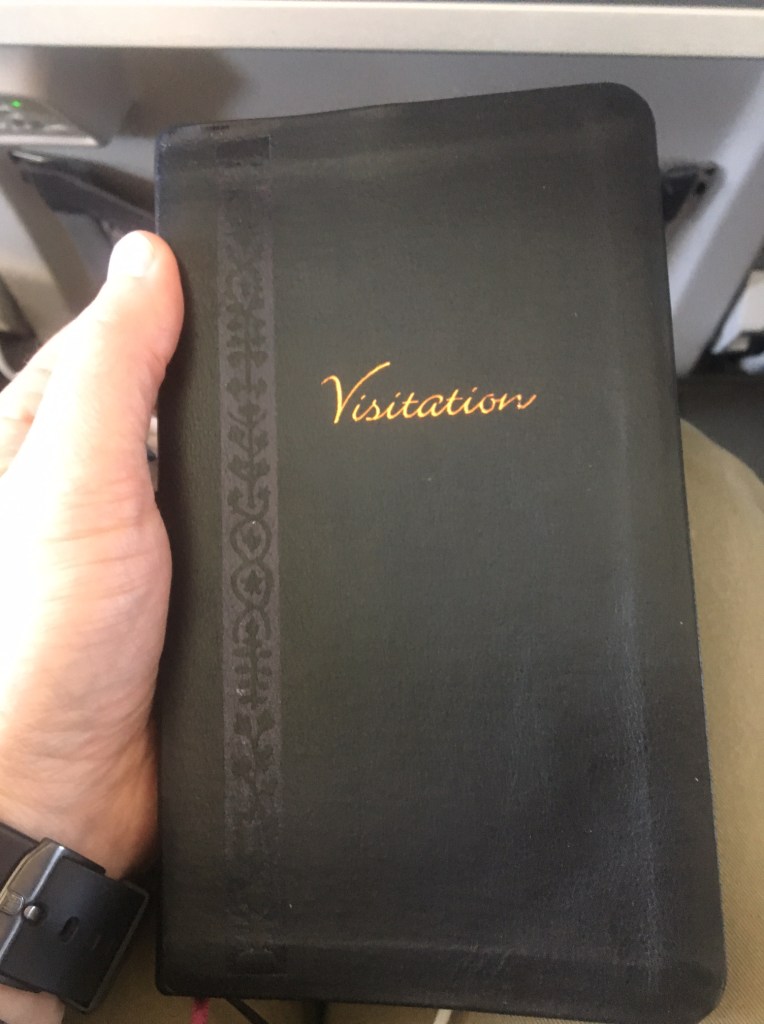 “Leah spoke comfort to my hurting heart at 30,000 ft. I deeply appreciated her thoughtfulness and compassion to go out of her way to reach out to me,” Carlton said. “Leah, your father would be proud.”

A quick layover in Seattle

On the ground in Seattle, Carlton was met by Seattle station supervisor Bryan Andrews, who gave Carlton his new set of boarding passes and arranged for access to the Alaska Lounge.

Andrews also worked with employees on the Seattle ramp to personally ensure that Carlton’s luggage was transferred to the return flight to Dallas.

“He set me up in a private conference room,” said Carlton. “He invited me to make myself at home, charge my devices, call anybody anywhere on their phone and help myself to lunch and drinks upstairs. Bryan also gave me his personal cell number in case there was anything else he could do for me. He told me he didn’t want me to have to think about anything except my daughter.”

Weller and fellow flight attendants Leah Caldwell and Briana Novak made sure a customer service agent added a note to Carlton’s travel itinerary, letting the flight attendants on the return flight to Dallas know about his situation.

Carlton was on his way back to Dallas a couple of hours later.

“I made my connection and some great friends met me at the Little Rock Airport and drove me to Children’s where I finally got to see Mia Beth around 10 p.m.,” Carlton said.

The Carltons spent the next four nights in the hospital before they were discharged last Friday afternoon.

“On doctor’s orders, Mia Beth has to stay home from school all week, but she’s recovering well,” said Carlton. “I simply want to convey my sincere thanks to Alaska Airlines for the culture of compassionate professionalism that empowered employees to care for me so well.”

Carlton was so touched by Alaska employees’ actions that he posted about his experience on his personal blog. Read the story in his own words here.