We love safety so much at Alaska Airlines our employees made a music video about it. The video features a number of the 100+ ways we’re focused on keeping our guests and employees safe as part of our Next-Level Care.

Recent research about air travel concluded that it is safe to fly by following a layered approach using masks, hand sanitizer and air filtration. With our safety protocols in place, including mandatory masks, enhanced cleaning between flights, HEPA air filtration and touch-free technology we believe it’s safe to fly.

“We are ready to take you anywhere you want to go, to any of the destinations we fly to,” said Jonathon, a designated trainer lead CSA and employee video star. “We’re the safest airline in the skies and we’re still creating an airline people love.” 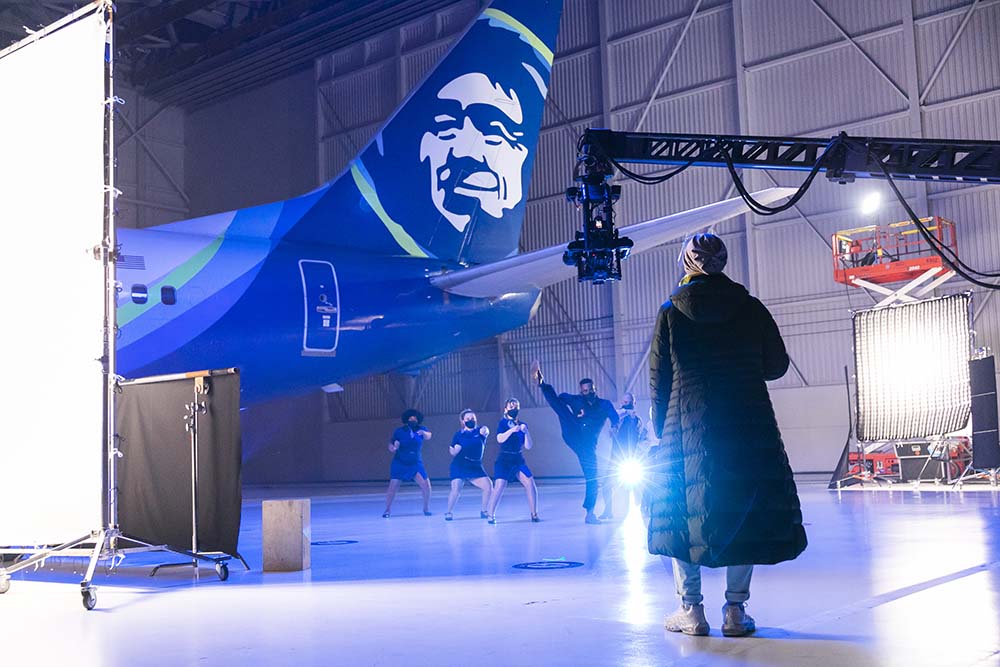 Behind the scenes + masks

“It was refreshing to work on a project with some much needed levity after such a challenging year. You can highlight the importance of safety and still have fun with it. I hope the uplifting energy and enthusiasm showcased by our Alaska Airlines employee talent brings a smile to people’s faces,” said Director Warren Fu.

The faces behind the masks are our very own employees! Employees were chosen for the video in a variety of ways including a few from our Alaska Flight Attendant Drill Team—who dance through the streets of Seattle for the Torchlight Parade and other events around the country to represent the company. Others were chosen based on workgroups, ability and willingness to dance, and leader nominations.

To prepare, our employees were given videos of the choreography in advance and asked to practice at home prior to arriving on set.

“I’ve never danced before in my life,” said Michael, a ground service agent at Horizon Air. “I focused on working hard at rehearsal and doing my best to keep up. I kept practicing the moves in order to successfully pull this all off.”

The day prior to filming, employees did a full 8-hour dress rehearsal where the group perfected the moves with the choreographer. 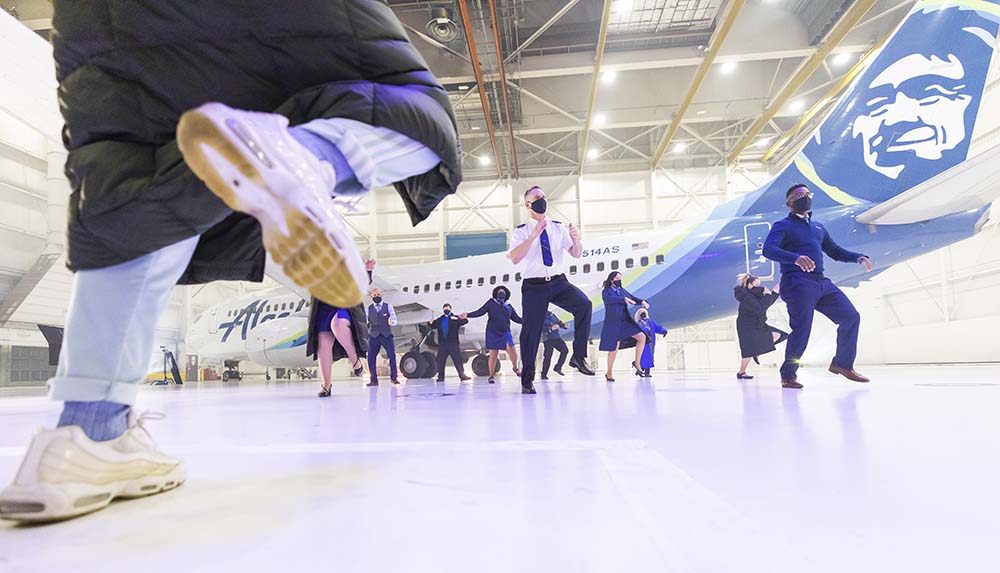 Filmed over two full days in our Boeing cabin trainer and the Alaska Maintenance Hangar in Seattle, employees did a phenomenal job showcasing our safety measures in a memorable way.

A production crew of approximately 40 people followed strict safety measures including everyone being COVID tested, masks had to be worn at all times and onsite COVID compliance officers made sure everyone was keeping safety top of mind.

“From the director, to the choreography, the cameras, the music, makeup and hair artists and so on it was like being on the set of a movie,” said Natalie, a Horizon Air flight attendant in Seattle, who also starred in the video. “Everyday was filled with excitement and anticipation. It was very professional, well organized and definitely on my top 10 things in life that I have been a part of.” 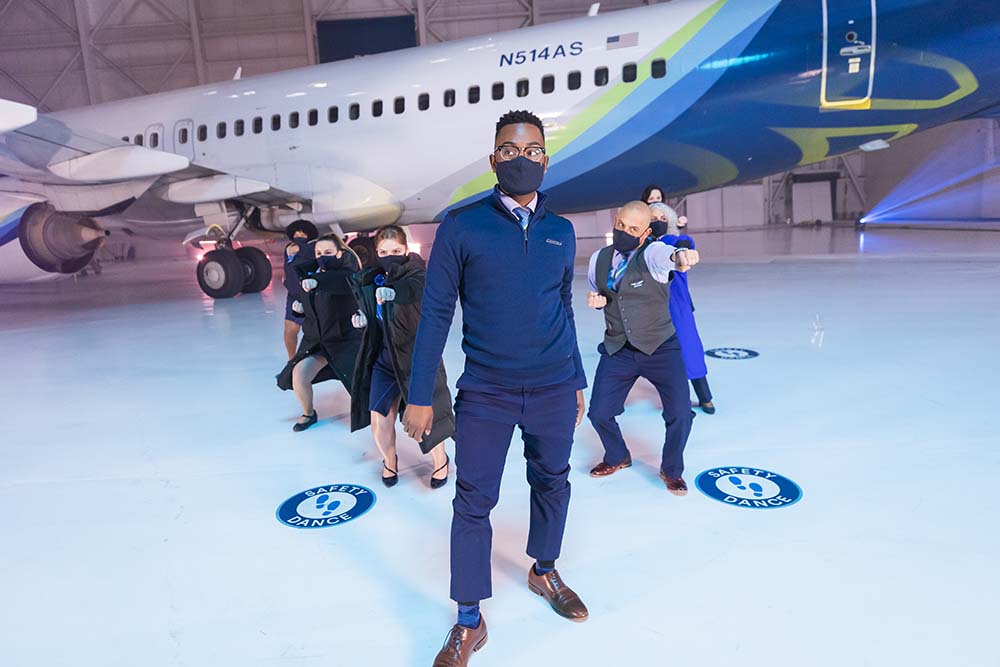 Overall, employees worked together really well and continued practicing on the side during downtime.

“It was such an honor to be part of this campaign,” said Orly, an Alaska flight attendant, who was in the video. “I have so much pride in this company and it was amazing to get to represent Alaska.” 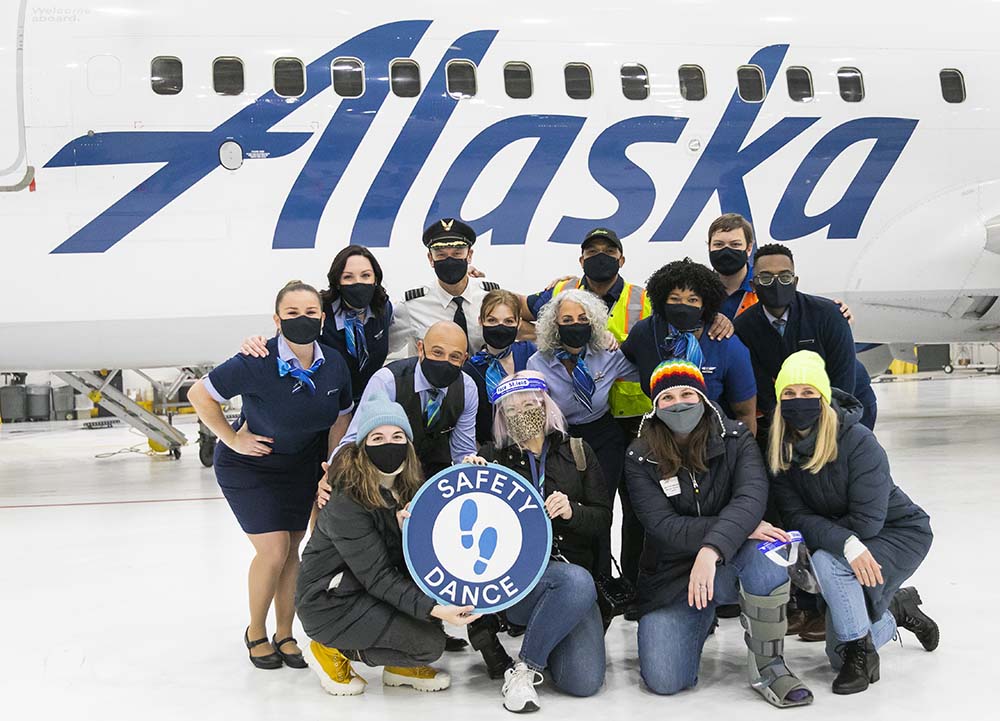