Karen and Mike Duggan were at home in Falmouth, Massachusetts – more than 4,000 miles away from Anchorage, where their 22-year-old son served in the Air Force – when they received his phone call from the hospital in August 2017. Seth Duggan doesn’t remember making it.

Seth and others from Joint Base Elmendorf-Richardson had been out in downtown Anchorage celebrating their safe return from their deployment to the Middle East when Seth was brutally attacked by a U.S. Army soldier also serving at JBER. The attack left Seth with a fractured skull. When Mike flew to Anchorage soon after, he realized his son would need his family by his side to help navigate his recovery. “We’ve spent the past two years flying back and forth, helping Seth with his medical issues and daily tasks that he’s struggled with,” Mike says.

Most of Mike and Karen’s cross-country flights have been on Alaska Airlines, provided through the Fisher House Foundation’s Hero Miles program. Hero Miles are donated by Alaska Mileage Plan members to provide flights to wounded, injured and ill service members, veterans and their loved ones.

Since 2008, Alaska’s Mileage Plan members have donated more than 90 million miles to Hero Miles. So far this year, donated miles have covered more than 220 round-trip flights, valued at more than $208,000.

“The generosity of people donating their airline miles to people who are in circumstances beyond their control takes the burden off a family,” Mike Duggan says. “Not having to worry about getting to our loved ones without going through financial hardship is just a blessing.”

The Duggan family was so inspired by the Fisher House generosity that they quickly became volunteers, too. “There are local organizations that bring in dinners for the military families. That just brought us to tears,” Karen says. “They get a lot of food donations and supplies from people in the area.”

Just after Thanksgiving last year, Mike and Karen surprised a Fisher House in their home state of Massachusetts. 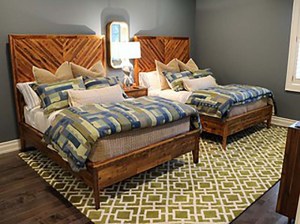 “We packed as much as we could into our car and drove up to West Roxbury, and we bought bakery items,” Karen says. “And we brought a gingerbread house! And a bunch of little shampoos and soaps and toothbrushes – just everything we thought would be helpful.”

“That’s how much this has meant to us,” Karen says. “We wanted to show our gratitude that we could be a part of such wonderful organizations like the Fisher House and Hero Miles.”

Hero Miles also provided a way for Karen and Mike to travel to Nevada last March to watch Seth compete in the Air Force Wounded Warrior Trials. There, he was a five-sport athlete, competing in track, archery, wheelchair rugby, wheelchair basketball and seated volleyball.

The injuries ended Seth’s dreams for an Air Force career; more than two years later, he still has permanent hearing loss and a need for ongoing medical care. This fall he moved to Florida, where his parents now live, so he can focus on his recovery and study economics at a university nearby.

“He lost a lot because of all of this, but he’s moving beyond that and he’s looking to the future,” Karen says.

About Fisher House: The Fisher House program provides a “home away from home” for families of patients receiving medical care at major military and VA medical centers. The homes provide temporary free lodging so families can be close to their loved ones during a medical crisis. Fisher House Foundation also operates the Hero Miles Program, using miles donated by Alaska Mileage Plan members and other frequent flyers to bring family members to the bedside of injured service members. The foundation also operates the Hotels for Heroes program using donated hotel points to allow family members to stay at hotels near medical centers without charge. Learn more.

Alaska Mileage Plan members can donate miles to The Fisher House-Hero Miles or another LIFT Miles partner organization. On Dec. 3, Alaska will match donations up to a million miles. How to donate: Log into your mileage account, click the donate miles link, and select the LIFT Miles organization they you’d like to support.

Learn more about how Alaska creates lift through sustainability