The airplane that hit a fish is one of the most legendary stories in Alaska Airlines lore.

Like all great fish tales, the size of the fish grows with every telling, but the story that made headlines around the world in 1987 is completely true. (Although it probably didn’t help that newspapers published the story on April Fool’s Day.)

On March 30, 1987, an Alaska Airlines 737-200 lifting off from Juneau had a close encounter of the aquatic kind, colliding with a large fish. The fish was gripped in the talons of an eagle that had crossed flight paths with the plane. The eagle must have decided that playing “chicken” with a 737 wasn’t going to end well, and quickly changed direction.

“In the process, the eagle either voluntarily released its meal or the rapid turn ripped it out of its claws,” Anchorage-based Alaska Airlines pilot Captain Mac af Uhr wrote in a 2005 story about the incident. “In one of those ‘I cannot believe this is happening to me’ moments, the two pilots (Bill Morin and Bill Johnson) watched the fish fall toward the aircraft as if in slow motion.”

“Did we just hit what I think we hit?” Morin reportedly said over the radio, as the fish thumped the aircraft just behind the cockpit window. The eagle apparently escaped injury. The fish became windshield sushi, confirmed upon inspection at the aircraft’s next stop in Yakutat.

“They found a greasy spot with some scales, but no damage,” Paul Bowers, Juneau airport manager, told The Associated Press at the time.

Morin would later estimate that the fish was about 12- to 18-inches long, and that it may have been a Dolly Varden, based on the fact that they were running at the time.

Today, Alaska Airlines flies its own big catch. The Salmon-Thirty-Salmon is a tribute to the airline’s partnership with the state of Alaska seafood industry. Alaska Airlines flies over 20 million pounds of seafood a year from Alaska to markets in the United States, Canada and Mexico.  Imagine how confused that eagle would be today if it crossed paths with this big fish. 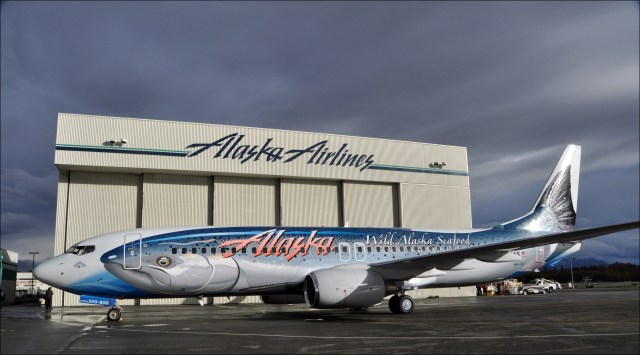